Beer # 80!!  And plein air at that!  I have been working on getting this beer series together for around two years now and I am getting very excited that I may come to a finish very soon!  Only 19 more to go is a very encouraging thought indeed.  I painted this painting of Sol due to the heavy inquiry for Mexican beers from fans of the series.  Maria and I decided to recreate our first date and went on a tandem bicycle ride to Point Woronzof.  We had a pretty great time, and I was even able to paint a beer painting from life!  The strange thing was we were there on a Friday afternoon, and it was a heavy airplane traffic time.  I kept having to drop my brush in the sand to plug my ears because those jets are soooo loud!  It was nice there on the beach and we set up while watching a couple of boys (men) play on the beach, they decided  to pick up a log and throw it around… How manly of them.  Well, they took off and a bus-load of military academy girls all in high school showed up.  It was very surreal to watch these young women stroll around the coastline all wearing matching blue uniforms and gabbing amongst themselves.  I was slightly self conscious about the beer I had in front of me, but not enough to quit painting!  Well they all packed up and left as a family came down to the beach.  The family didn’t look so Western to me but they were drinking Western Family soda and left several cans behind on the beach that Maria and I cleaned up before we left after them!  I guess it made me feel better about publicly drinking as at least I wasn’t leaving litter at the park behind me.  I do not know what their deal was but people, please don’t litter, it is really rude.  Especially when on the beach, it goes right into the ocean unless somebody else picks up after you!!!  Okay enough harping and hope you enjoy the sun!

This painting is available for sale at my online shop! 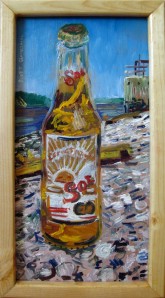