The daily beer painting is of a really awesome brew known as Lindemans Geuze!  I learned that besides being a lambic beer made with spontaneous fermentation and aged hops, this beer is made from 25% three-year old brew, 50% two-year old brew and 25% one-year old brew.  The blend allows for just enough sugar to create a 6% bottle-conditioned beer.  I also learned that lambics contain a ton of wheat malt — at least 30% wheat, a fairly high quantity compared to other wheat styles.  Oh, and aged hops are used, which create a cheesy, and almost meaty smell that is musty and stale — just what this beer requires.  Stemming from generations of brewing tradition the reason why is lost (probably due to availability), but aging the hops is important.  This is very counterproductive to what we like here in hop-headed America.

I have been getting lucky drinking geuze as of late.  I was able to consume this bottle of Lindemans (pictured here in front of the beautiful brewing room), but later in the day I was at a fellow Great Northern Brewers Club member’s house for a BBQ and mentioned that I brought over a home-brewed saison but had a geuze earlier.  The host said, “Oh, I have tons of geuze in my cellar that I made a few years ago!”  He started to explain the process and finished by telling me that on a recent trip to Belgium he met the owner of the Boon Brewery, and shared a bottle of this beer with him.  My host said with a smug look on his face that the owner gave him the best compliment one can get: it was so good he would serve it to his family at dinner.  So I crawled into his cellar under the floor of his house (I wish I had one of these) to look for the geuze, and chocolate infused mead, and was amazed to see hundreds of bottles of different-flavored lambics down there, not to mention a few unopened bottles of Vertical Epic series (including a case of ’04) among other treasures.  The geuze was from 2006, meaning it was brewed in 2003.  I brought up the two bottles and sampled the geuze, and it was every bit as good as the Lindemans (which is an amazing beer) maybe even a bit more cidery.  Super good!  Way to be GNBC! I  love sour beers, especially lambic geuze!

Cheers To Lindemans Brewery!  Thank you for brewing a tart, spontaneously fermented beer that is so amazingly different than a generic lager!  I am tempted to brew a batch in the next three years.  Maybe I can collaborate with the GNBC! 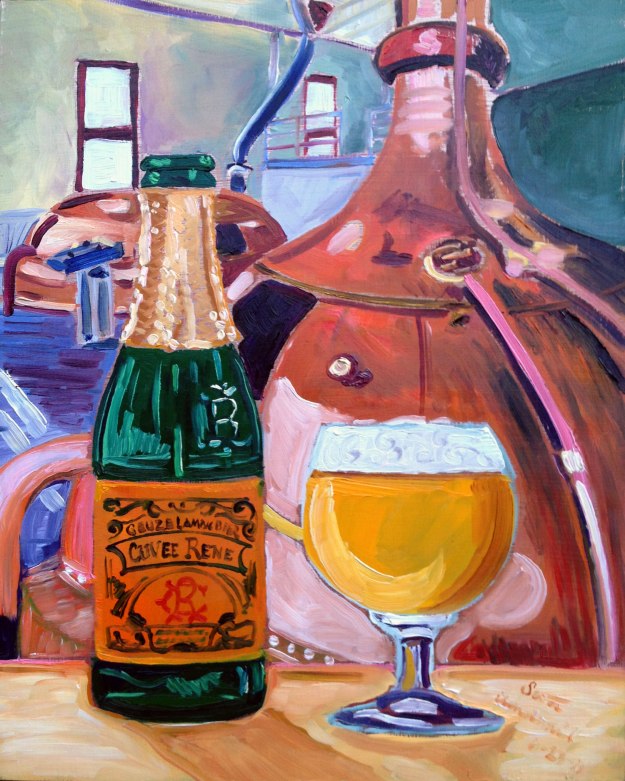