The featured beer painting of the day is of Chocolate Oak Aged Yeti Imperial Stout by Great Divide Brewing Company in Denver, Colorado.  I wouldn’t say this is a monster of a beer, even though it’s 9.5% and black as sin with a darker head than most stouts.  I would call it decadent, beautiful and amazing, but not a monster.  I think when the brewers dropped some of the hops out of the recipe, this beer went from being a monstrous stout, to a perfect, oak-aged delight!

The logo on the bottle is graphically strong — something a hipster may have designed.  Good thing some hipsters are drinking and making good beer.  PBR has its place and time, but seriously, give up the red, white and blue ribbon can, and try something a bit better.  In the words of a friend’s father, “Drink better, drink less.” Those words are full of wisdom.  The hipster mentality that PBR is better than Budweiser is a cop out.  Both should be banned from a true beer lover’s fridge!

The Yeti is coming to take all the PBR!  This monster is coming to remind you how bad it really is!  There is nothing like an oak-aged chocolate bomber of a beer to keep it real!  This beer not only looked pretty, it tasted great too, and it drinks like wine.  You don’t have to carry six bottles around, one 22 oz does the job just fine.  I shared mine around a campfire, and we savored every sip.  I was pouring my personal serving into a little blue espresso cup, and I think I could have walked through the streets of NYC carrying the same little cup.  It was perfect for incognito beer consumption.

Cheers to the Yeti!  Oaked and delightful!  A chocolate overload of a brew!  May Great Divide Brewing make batch after batch of this killer beer!

The original painting sold. You can purchase a limited-edition print, or order a custom beer painting at my Etsy shop. 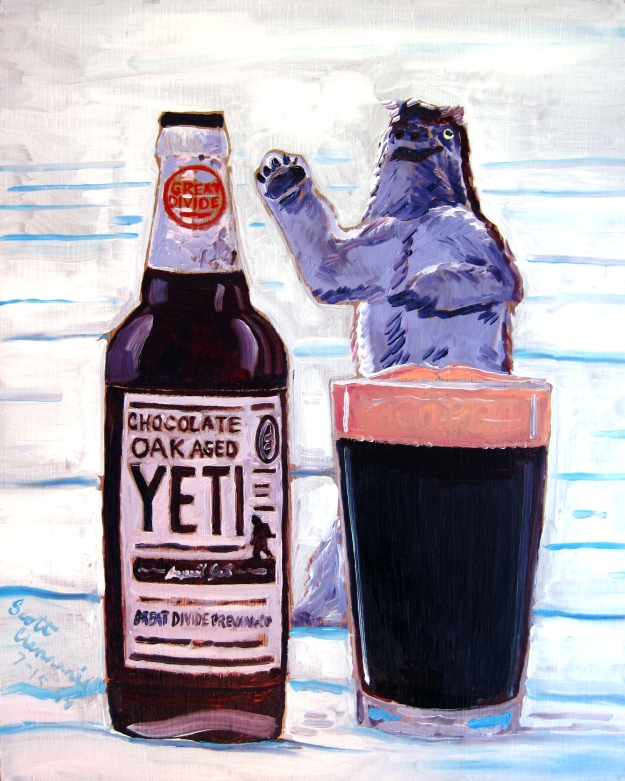