The featured beer painting of the day is of Hennepin Saison by Brewery Ommegang of Cooperstown, NY. When I first came to McCarthy, Alaska ten years ago, I was so taken with the beauty of the Kennicott and Copper River Valley that within three months of that first trip I had purchased ten acres. The following summer we came out on our first trip with a mission to build an outhouse. What we didn’t know is that under the thin layer of mossy soil, the ground is very rocky. My sister, my wife, and I took turns digging the hole in the woods with an old shovel that I had borrowed from my parents. After an hour, or two we estimated that we had dug down four feet, but I can assure you it was closer to two. Then, snap! The handle of the shovel broke off! So we looked around for a suitable replacement from a green willow tree, but no such luck. That was all the hole digging we could do on that trip! I built a plywood platform for the open-air outhouse, and set it on top of the hole. To christen the new improvement to our lot, we popped the cork on an Ommegang beer. Pop! We passed the bottle, as we hadn’t brought glasses. One of the highlights of that trip was cracking that bottle after a long day of digging in the hot sun, and I have always loved Ommegang ever since!

Father Louis Hennepin was the first European to see the Niagara Falls, so I should have painted that in the background (definitely not my outhouse), instead of the Cooperstown ball field. However, according to the Internet, Cooperstown is where Americans invented baseball. So I put the ball-field in the background. I am hoping to make a trip to see this amazing brewery when I head back east in November.

Cheers to popping corks in the woods! Thanks, Ommegang, for making a classy beer to enhance my life! Oh, and the beer was very good! I love a good, spiced saison! 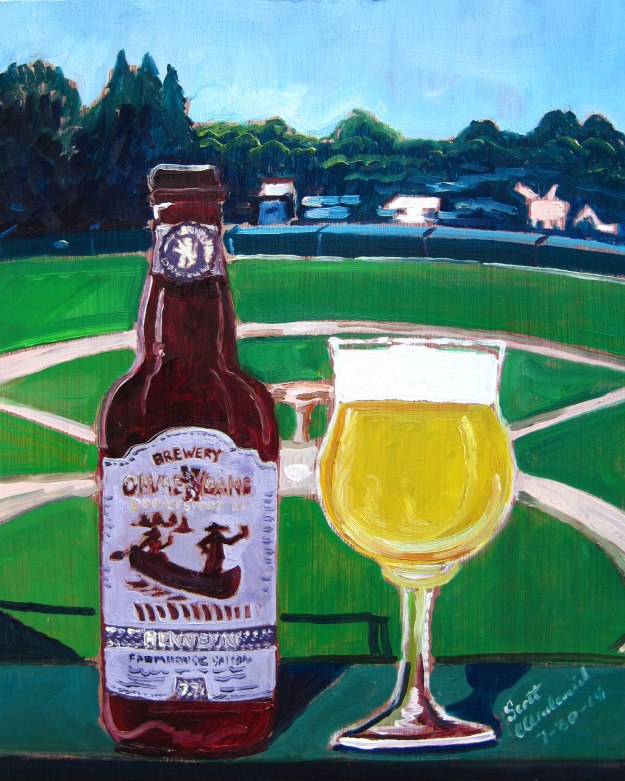