The featured beer painting of the day is of Mikkeller Centennial, part of the single hop IPA series. Most breweries use hops that grow near the brewery and make the freshest, best ale they can for the dollar. Mikkeller doesn’t have a brewery; it contracts every batch of beer, which is a very cool idea that seems to be successful. Founded in 2006 in Copenhagen by Mikkel Borg Bjergsø and Kristian Klarup Keller, the company has since expanded to Bangkok, San Francisco, and Stockholm, recently producing bottled beers that we can even buy here in Alaska. Contract-brewing is an intriguing concept whose time has come. Keep your overhead low and your concepts strong, and the sky is the limit. This beer was brewed in conjunction with De Proef Brouwerij from Lochristi-Hijfte, Belgium.

The Single Hop Project is showcasing 18 different styles of hops. All the beers are brewed with the same weight of hops for bittering, flavoring, aroma and dry hopping. The grain bills are identical, so the only variable is the hops, which are scientifically switched. The mission statement on the bottle says, ”This gives the consumer the possibility to smell and taste the unique characteristics of each variety, and will hopefully help to educate people about the wonderful world of hops.” With verbiage like that on the bottle it is obvious these guys are kings of marketing! This beer was good. Centennial hops are delicious, and I noted a bit less bitterness than in most IPAs. There are many different varieties of Centennial hops, and I wonder what the alpha rating is in this particular batch. It normally comes in between 8.5% – 11.5%, so a righteous hop for an IPA. Citrusy and piney, it’s a good hop variety for American style ales.

Cheers to Mikkeller, a brainy beer maker indeed! Keep it cerebral and keep it interesting. Good job on the 18 single hop IPA concept! I will try another please! 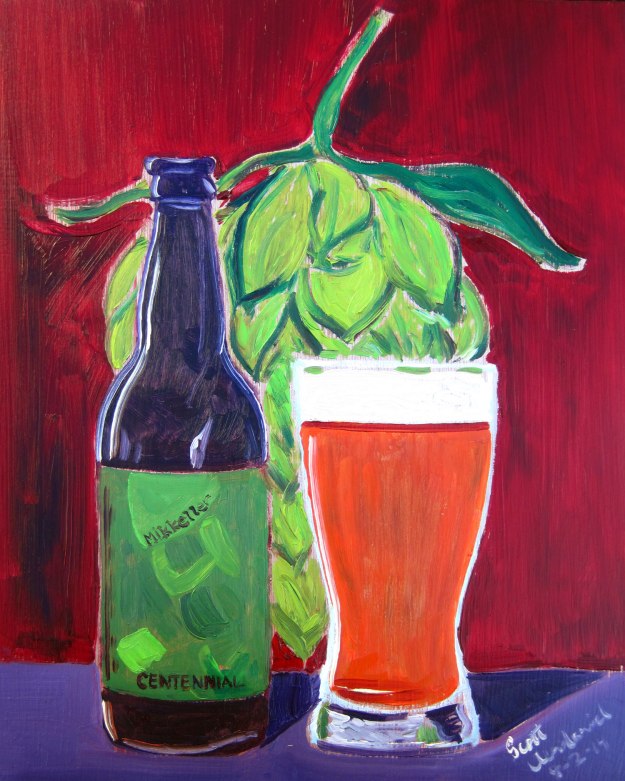