The featured beer painting of the day is of The Mens Room Original Red by Elysian Brewing Company in Seattle, Washington. The Mens Room is a radio program aired on 99.9 FM KISW. These guys like to talk and they like beer, so they made an official beer for the radio program. So I had all kinds of thoughts about urinals, toilets, and a bunch of funny potty jokes, but I don’t think anybody wants to hang a painting of a urinal in their man cave, so I painted an old-school radio in the background.

This beer tasted like a traditional English bitter, but of course you can’t call a beer a bitter here in America, especially after all those Miller Light commercials with the pucker-faced man complaining about expensive bitter beers. Ironically, to me a bitter isn’t even bitter at all, not like Russian Imperial Stout or a wicked strong IPA. This is an easy-drinking English Style Ale with a hint of English funk. The flavor is just what you would expect if you rolled up to the bar in a London pub and asked for a pint of the local bitter. Maybe that is why Elysian won Silver at the Great American Beer Fest for Best Ordinary Bitter.

Cheers to The Mens Room! A great radio show and a great beer! 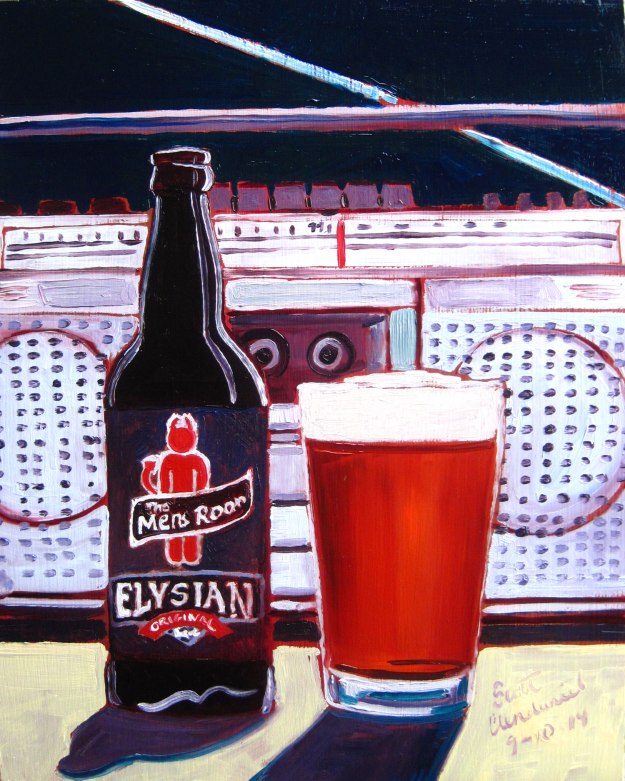