The featured beer painting is of Fort Point Pale Ale by Trillium Brewing Company in Boston, Massachusetts. I was lucky enough to visit the brewery in Boston on my recent brewery tour of the east coast. Thanks, Brian, for sharing your vast expertise of the craft beer world! Your suggestions for delicious brews have been spot on, and thank you for gifting me this bottle, which made it home securely in my luggage! I was able to taste several different Trillium offerings when I was in Boston. Their IPA and Saison are both very solid offerings, but the Fort Point Pale Ale is a beer near perfection. This is one of the best pale ales I’ve ever tasted. It’s fresh and crisp, with slight notes of citrus. I could tell that this pale ale, sold in 22oz bottles, is in high demand, but perfectly aged. Not too green, yet not sitting on the shelf for too long. This brewery knows how to store beer in a way that won’t damage the delicate flavor nuances that result in a perfect pale ale!

There is more flavor in a bottle of beer like this than in a whole case of Budweiser, and that’s an understatement. I am wondering as I go out into the world why so much generic bland beer is consumed when there are such amazing options available almost anywhere in the country. For $18.99 you can buy an 18-pack of fizzy carbonated beer that somewhat resembles a craft brew in name and appearance only. You can probably catch a bit of a buzz if you drink several cans, but what I am concerned about is flavor, not how much alcohol I can cram into my body. As I was savoring a German import beer in Russia, I was told by some mature women that it’s a bad deal to buy beer when liquor offers a larger bang for your buck. I know they were right, if alcohol consumption is the goal. Trillium’s beer is not a beverage you should choose if you think like those Russian women, but is a good choice if you want to drink a quality craft beer that will make your taste buds feel pampered. This fresh, artisanal beer will give you a sense of well-being and happiness.

Cheers to Fort Point Pale Ale, the brew that tastes like liquid freshness! A superb beer from a super brewery! 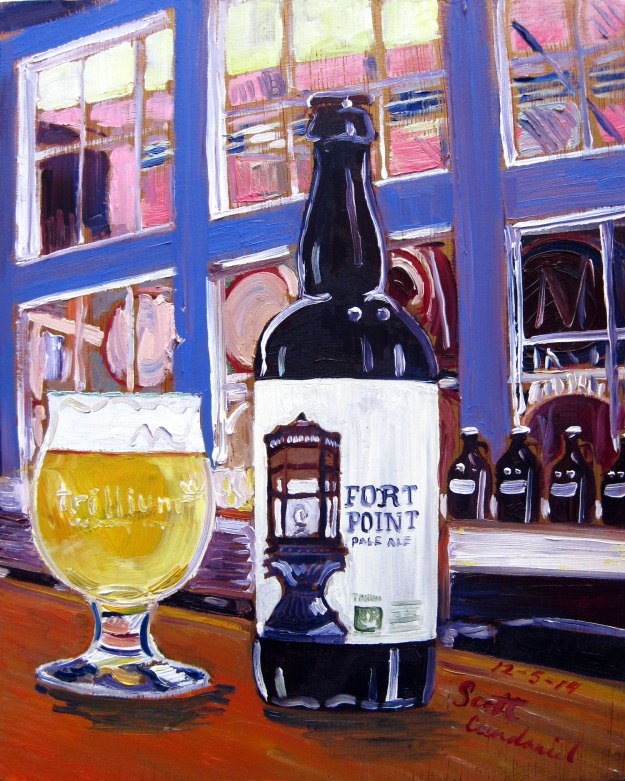