This week’s beer painting for Thirsty Thursday is of Red Chair NWPA by Deschutes Brewing Company in Bend, Oregon. I neglected to include this great beer in last year’s Year of Beer Paintings series, because I painted many other great Deschutes beers, and was looking for more variety of breweries to increase the scope of the project. I chose to paint this beer this week because of the upcoming Merry Marmot Festival taking place this weekend at Arctic Valley – a ski area near Anchorage, Alaska. The festival marks the end of the ski season for this ski area, which is a bummer, because on a normal snow year we’d still have a couple weeks of great skiing left, but the lack of snow this year makes that impossible. Arctic Valley has two red chair lifts, which are Riblet brand, with the tailbone-smashing center pole. Hope your snow pants provide ample padding. Still, it’s the best option for getting to the top, the other one being a Poma t-bar. Although this beer is named for the red chair on Mt. Bachelor, I consider it to be a tribute to all red chairs out there. This North West Pale Ale has a nice hop aroma and flavor. Hardly a pale ale, full of Centennial and Cascade hops coming in with 60 IBUs, this beer is closer to an IPA. Overall, a great beer to enjoy ski après for its refreshing crisp flavor, and stunning complex malt body.

This painting sold. You can purchase a limited-edition print, or order a custom painting at my Etsy shop. 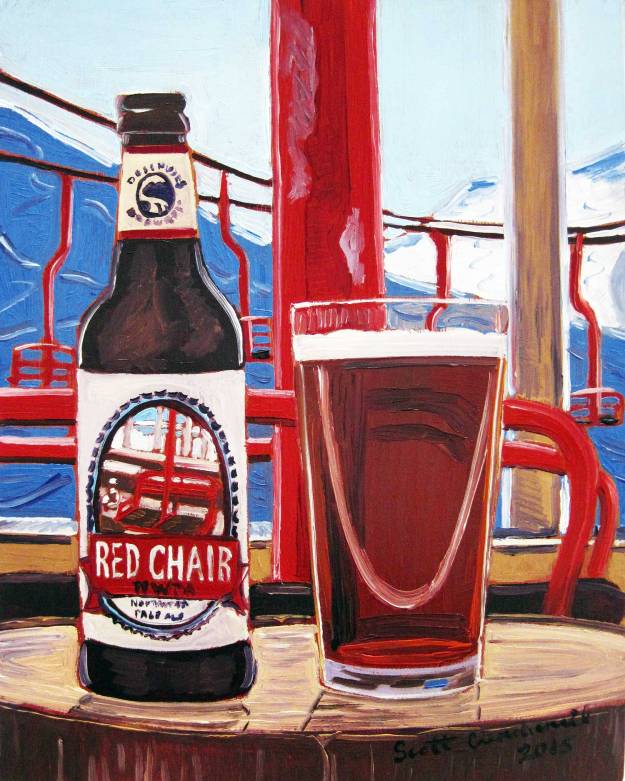