This week’s beer-themed painting is of my homebrewed Saison chillin’ in the snow on top of Flattop Mountain. After a vigorous hike to the summit we drank the beer while enjoying the view and then had a good time sliding down the snow on our way down. I chose to paint homebrew this week because May 7th is the day that National Homebrew Day was announced before Congress in 1988. Last Saturday the Great Northern Brewers Club put on an event known as Brew-a-thon where home brewers of Anchorage showed up to brew together. It is a national event that kicks off with a nationwide toast at noon CDT, 9AM here in Anchorage! I teamed up with newly retired Rick Levinson to brew a California Common Beer (like Anchor Steam Beer) we are calling the Steamy Retirement. I have been home-brewing for ages and consistently putting out homebrews for ten years now, but I recently upgraded my system from a less than five-gallon setup, to a ten-plus-gallon, all-grain, two-kettle brewery. I enjoy every aspect of the brewing process, except for cleaning fermenters, which is the most boring, although extremely important part of the job. In brewing, cleanliness is next to godliness! I have filled every fermenter I own with beer from the new system. Cheers to Arctic Brewing Supply for having every piece of gear a home-brewer could ever need, and all the ingredients to make world-class beer! I hope your homebrew tastes fresher and more delicious than any commercial beer! If you brew with the GNBC, you are on your way!

The original oil painting sold.  You can purchase limited-edition prints, or order a custom painting at my Etsy shop. 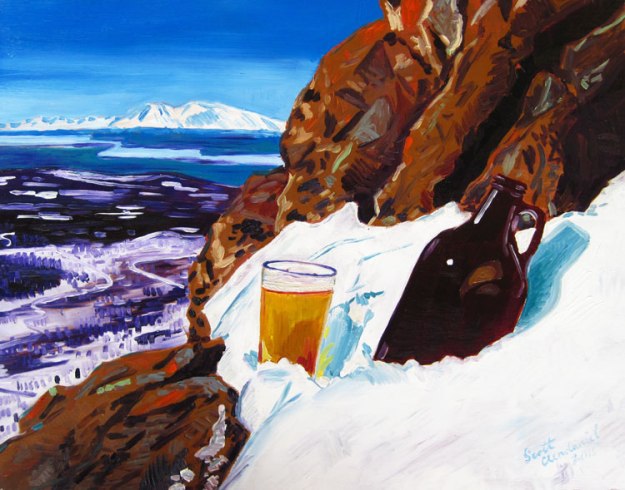