Howdy, Thirsty Thursday beer painting fans!  I was hitting a wall with the art history beer parody paintings, and I was talking it over with my friend, Kara, who I can credit with the brilliant idea I used for the Spotted Cow painting.  Her uncle was visiting and had brought over a mix-pack of Alaskan Brewing beers.  These are not the most sought-after beers, but are often the most consumed ones in Alaska, kind of like Yuengling in Philly.  They are popular across the Pacific Northwest as well.  I have some of my fondest memories sitting on the beach at Point Woronzof sipping an Alaskan Amber.  Kara told me to paint a polar bear from the Coca Cola commercials drinking an Alaskan White, because it has a polar bear on the label.  I thought that this was a great idea and here it is.  Alaskan White wit-style ale is a very popular Alaskan Brewing offering, and was one of the first paintings snapped up from the original 99 Bottles of Beer on the Wall painting show I did back in 2011.  I hope you find this as humorous as I do, because I intend to extrapolate on this series.  Cheers!  I hope you are enjoying your Alaskan summer as much as I am!

This original oil painting, and 99 limited-edition prints are for sale at my Etsy shop RealArtIsBetter. 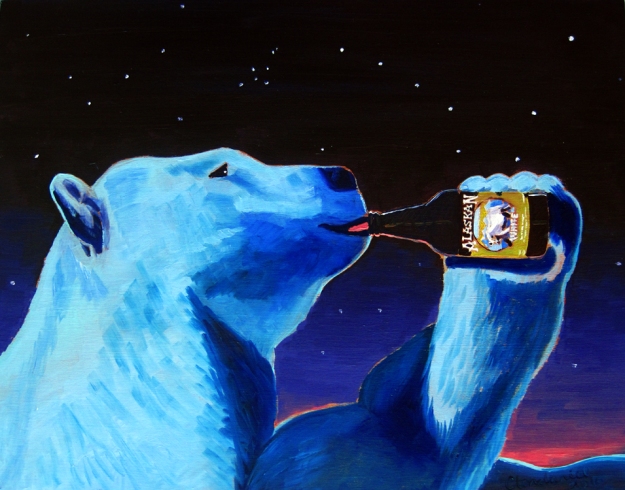