The daily beer painting is of Summer Kölsch-Style Ale by Alaskan Brewing Company.  Alaskan summer is finally here!  Spring was like a fart in the wind — over in a blink of an eye.  Notice that Alaskan Brewing makes Winter and Summer ales but not Fall or Spring, because these seasons are truncated here.  A Kölsch is a perfect summer-time beer anywhere, but it is good on a rare hot day here in Alaska!

The Orca, more of a giant dolphin than a whale, is a very interesting sea beast, and represented here on the iconic label for Alaskan’s Summer.  Considered an Apex Predator, there is nothing in the sea that hunts the Orca.  Must be nice to be at the top of the food chain.  Orcas are in every ocean around the world and eat a variety of different prey ranging from fish, to marine mammals, including other species of whales.  The Orca comes to Alaska from about May 5 to June 5, so they are about to head out.  They live and travel in large social groups called pods.  The adult male Orca can grow upwards of 20 feet long and weigh as much as 11,000 lbs!  The Orca can average 75 miles per day during migration time, and can swim up to 35 miles per hour in short bursts!

This Orca is depicted in front of Margery Glacier!  The cruise ships pull into Glacier Bay National Park, and wreak havoc on the sea-life by making a ridiculous spinning circle just so both sides of the ship can see the calving glacier.  All day long.  Which was once beautiful glacial blue-green water, turns ruddy brown-gray as the silt layer is dredged into the entire ecosystem!  How can this be good for our National Park?

This beer pours out a straw gold color, crisp and cold.  It has the refreshing nature of a light bodied brew.  Noble hops and top-fermenting ale yeast create a perfect summer sipper. Alaskan Brewing has really stepped it up a notch since it started producing the Rough Draft Series, but it has also changed many of the recipes for the flagship lines.  Everything has been clean and delicious, even though it travels all the way from Juneau. 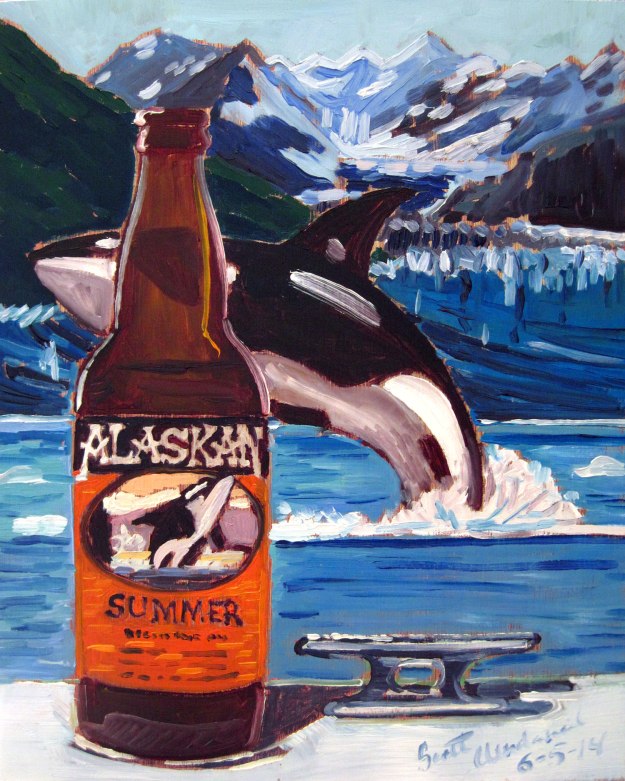