Another day, another beer painting.  This one is at the top of the pinnacle — ACME California IPA by North Coast Brewing Company.  I really like North Coast Brewing; every type of beer I’ve had from there has been delicious, so when I saw that this IPA was from North Coast, I had to nab it.

This beer was good, fresh and juicy.  Not a hop bomb, but a balanced joy of an IPA to drink.  I think it would be good for people who normally steer away from IPA, as a trainer IPA.  Dry is the word.  I am looking for not too much bittering, or flavoring hops.  This beer was all smell.  You can taste the aroma in the beer; it is fresh and floral .

So I painted this Anvil of a beer on the edge of the roadrunner’s cliff.  I feel the poor coyote deserves a beer after having 50 lbs of wrought iron dropped on his head.  I hope it doesn’t break on the way down.  I have a thing for anvils, and I hope some day I get to start a small blacksmith foundry for making hand wrought iron tools and parts.  The heart of the blacksmithy is the foundry and the anvil.  You can’t work on iron without a proper anvil.  But I need to graduate from my log building status first, then I have to build a sauna, a proper studio, a dome oven, a guest cabin, and then maybe I will get onto the blacksmithy.  I’ll be fifty by then, but fifty is the new thirty anyway.

Cheers to ACME IPA from North Coast Brewing Co!  I know this brewery is top of the form.  Nailing the freshest tastiest brews time after time!  Oh, and by the way, the Rasputin Russian Imperial Stout painting is still available (one of my paintings I’m most proud of).  I always think of the Tetris song when I look at it. 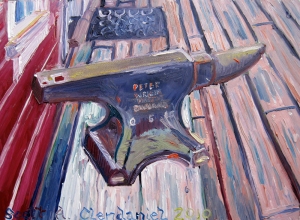 If only I had an anvil like this, I would build myself a FORGE!  I am looking forward to the day I get my own anvil.  It is especially important to me as an object to paint because of work ethic it symbolizes to me.  This one is from the McCarthy Museum and I look forward to continuing with this series, the artifact series.  There is a beautiful Art Deco cash register that inspires me to paint.  Maybe there will be a later painting of it.  What is it about things from the past?  Why are older objects more stylized?  Why do Modern and Post Modern pieces lack any kind of style?  I feel that these oversimplified aesthetics are relying too heavily on mass appeal, while the older styles have more design value.  Here is a painting dedicated to the older style and to the symbol of work ethic.  Maybe I will bring back Art Nouveau and Art Deco as Neo-Art Deco-Nouveau…a revival, if you will.  I think it could make for some beautiful paintings…