Merry Christmas Eve! The featured beer painting for the day is of Samichlaus Helles by the Castle Brewery in Eggenberg, Austria. This beer may look like a normal Helles beer, but it is not. It is actually a big barleywine-type of malt liquor at 14% ABV. Brewed in a castle in Austria, this beer is extra special, because it is brewed only once a year on December 6th, and then aged for 10 months before bottling. I hope your local bottle shop has this offering, because this is a rare release, and may not make it everywhere, because of its limited nature. It’s been a tradition to brew this beer since 1321, but it was halted periodically including a period starting in 1986, but was reinstated in 2007. I first drank this beer in 2007 when I was painting my first big beer paintings series called 99 Bottles of Beer on the Wall. Now, seven years later, this beer tastes much better than I remember. I have had many more barleywines, strong ales and lagers since then, or maybe this was a better vintage year. I don’t know, but I feel this was an exceedingly good batch. A great dessert beer, and a perfect pairing with snack cakes. I just got a case of Tastykakes from Philly as a Christmas gift from my buddy Rich, and the Samichlaus matched perfectly. Crack open a 12 oz bottle, but share it with at least one other person, otherwise you will feel your head spin.

Cheers to Christmas, and seasonal brews! The Samichlaus is a very good brew for the holiday season! Wish I could go to Eggenberg to see the castle where this beer is brewed. From all the images I saw on the Internet, I surmise that peacocks roam the castle grounds. Better go in the winter season, so I can go skiing in the Austrian Alps too! 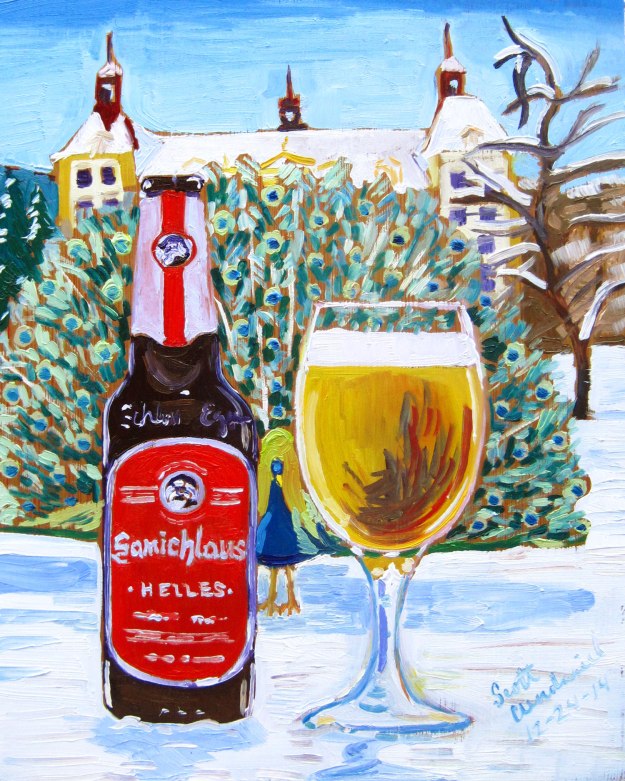 The featured beer painting of the day is of Granitbock from Hofstetten Brewery in Austria!  It is a special beer made by heating granite rocks and dropping them into the wort.  Eventually, if you drop enough hot stones into the unfermented barley sugar water, it will boil.  I don’t think I can even taste a single hop in this beer.  It is a malt bomb for sure.  When you add white-hot rocks to stone vats of beer you actually caramelize some of the wort in the process.  This produces a fragrant flavor in the alt-style beer of rich sweetness, with plum and raisin tastes.  This beer has been brewed since 1229.

When I was painting this beer, I knew it was made with granite stones.  Since I live in Alaska, the first thing that came to mind when thinking of granite was rock climbing.  So I put a climbing bolt in the rock behind the glass because granite is the best rock for climbing, and is also good for brewing in this exotic style.  Austria is home of some famous rock climbing sites and when I was growing up, I was way into it until I realized I would rather spend time painting on the ground while my friends climbed the cliffs.

This beer is decadent, and I recommend it as a good example of a bock, very malt-forward and a good one for a cold rainy day.  As it warms up, it is a perfect belly pleaser and the aromas and flavors are complex and delicious.

Cheers to Hofstetten Brewery in Austria, which makes a truly traditional bock that will knock your socks off!

You can purchase this painting, or a limited edition print at my Etsy shop. 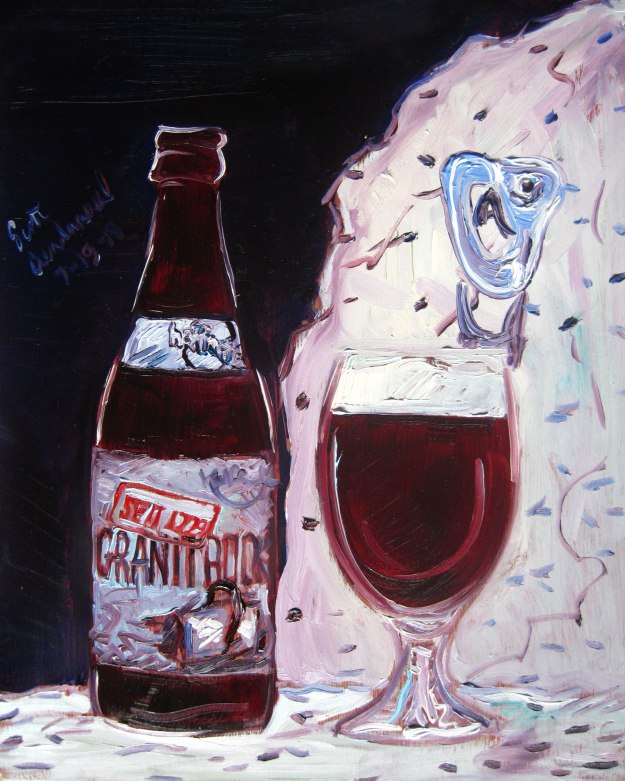