I bet Bavik Belgian Premium Lager would be awesome after a sporting endeavor, rather than after sitting in my studio, painting.  Actually, it was refreshing nonetheless.  When I cracked open this Belgian can of beer, memories from bicycling across Europe sprung into my head.  I started to appreciate pilsner beers during that trip.  I had always liked them, but often passed them by for IPAs or bigger, more flavorful brews like porter and stout, or anything imperial.  Although Budweiser and Miller market their American concoctions as pilsner, they aren’t anywhere close in flavor to a true pils.  I learned to love that smell of the aroma hops that Americans forget to put in their yellow fizzy counterparts.  Bavik’s version was fresh, aromatic, and thin.  A perfect hydrating beer.  I drank this beer before I could legally drink in America.  I was 20 years old and living in Athens, Greece.  I bought a sixer of Bavik mostly because it was half the price of Heineken.  I didn’t even know the name of it back then, I just asked for Bira! This one hit the spot.

Living in Greece in my early adulthood, then bicycling across the European continent just a few years ago, hydrating on pilsner the whole way, really opened my mind to the Euro yellow beer flavor that really doesn’t exist anywhere else in the world.  Although craft American pilsners are also very good, they are decidedly different.  To brew a Euro pilsner you really aught to be in Europe, buy European hops and grain and use European water.  When I arrived in New York City after that European odyssey, I immediately drank an American IPA, but somehow immediately missed the European beer flavor.

To memories lagering in the depths of my mind!  Finding a good pilsner in Alaska is a true treasure, but in Europe finding anything else might lead to an adventure!  To differences across the world!  Sit back and enjoy a brew thinking about life, time, and what the next flavor should be! 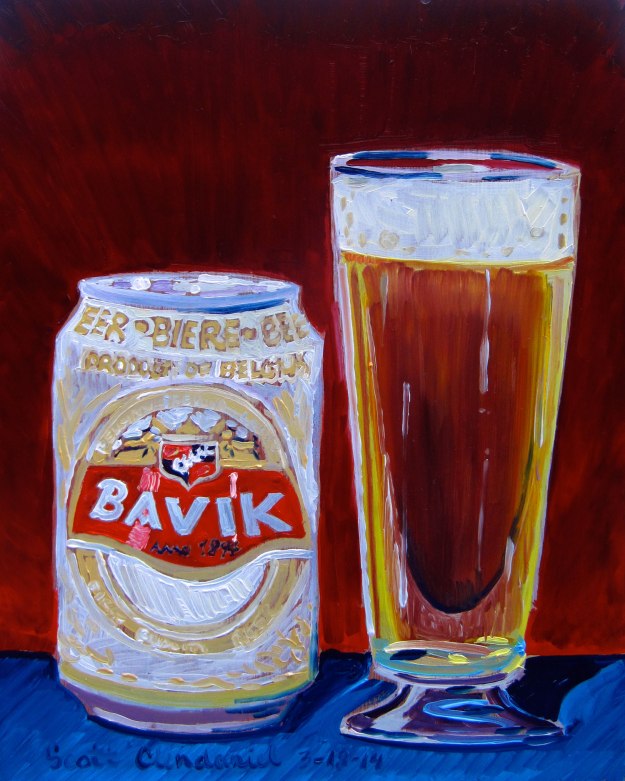 The daily beer painting is of Gruut Blonde from Gentse Stadsbrouwerij in Gent, Belgium.  A gruut is a special old style brew that is brewed with spices instead of hops, so if you are a hop head, hang your head low and give it a try anyway.  I bought this beer because an employee at my favorite bottle shop, La Bodega, suggested I try a gruut, and said that this one was particularly nice.  So I took him up on it because I had never had one before.  I really liked it.  I can’t tell you what spices are in there, but I am thinking some ginger and cinnamon, and maybe juniper berries.

“Stadsbrouwerij” means city brewery in Flemish and “Gentse” means from the town of Gent.  I did some research about this particular brewery and found out that it has only a three barrel system making really small batches of this really cool brew.  The brewery has urinals that look like lips in the men’s room, so I decided to paint them in the background.  What is up with Belgians and their potty humor?  I mean, why make sculptures of peeing children?

To drinking new brews!  Something outside the norm, something special!  To experiencing a bit of unique culture even if you don’t know anything about it! 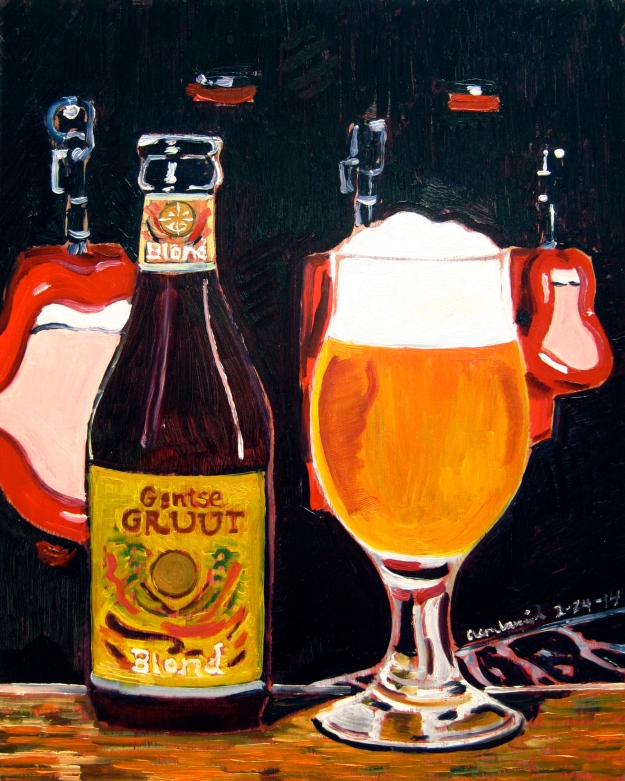