The featured beer painting for the day is of Schöfferhofer Hefeweizen from Frankfurt, Germany.  When we fly to Europe, we fly on Condor over the North Pole from Alaska to Frankfurt, which is one of the biggest cities in the EU, and is centrally located.  It is one of the most modern looking cities, with many skyscrapers.  Due to its beautiful skyline, it has been called the Manhattan of Germany.

German breweries make the best hefeweizen.  The German-style hefe from your local brewery will probably taste fresher, but just to see if the brewers are on target, try a true German one from time to time.  A great example is the Schöfferhofer Hefeweizen, so buy a six-pack just to keep your palate grounded in reality.  The Germans have two summer beers, hefe and pilsner. Pilsner is a little boring most of the time, but sure is refreshing.  The hefe, on the other hand, has a lot going for it.  Not a hop bomb, but fresh and citrusy, with malt and yeast flavors of cloves and banana.  When traveling around Germany, tasting hefe in different cities, you’ll notice that the flavor changes based on the location.  Steeped in tradition, almost every German brewery has over 150 years of experience, and they don’t fix what isn’t broken.  The beer recipes are like treasure, and tradition is as important as making sure there is beer on the table for dinner.  So the beer tastes the same time and time again.  These guys keep it as close as possible to the recipe their great grandfathers were brewing!

Cheers to traditional German bier!  What would the world come to if you couldn’t buy a bottle of Schöfferhofer in Alaska?

Today’s beer painting is of Reissdorf Kölsch from the Privat Brauerie Heinrich Reissdorf. Amazing beer!  I am sitting in my outdoor studio in McCarthy, sipping on this beer with two good friends and all of us are amazed at this delicious crisp German Kölsch.  “What a good beer!” one of them said as he swilled it down.  “Good beer!” said the other.  I was really thirsty this late afternoon as we had just hauled 20 five-gallon jugs of water all the way from the spring to my lot.  I think the hot weather (probably 80 degrees F in Alaska), and the cold beer after manual labor made this a very, very enjoyable beer.

I love the German pilsner, but a Kölsch has even more breadiness.  The yeast flavor is a bit different, more chunky.  Many German beers are very similar with vary subtle differences.  I love German beer from my last bicycle trip in 2011.  I rode across the country of Germany as part of it and tasted many amazing beers.  I wish I had gone to Köln!  I was getting annoyed at big cities and decided to skip it.  Next time I go, I will totally bring a folding bike and hop trains and stay in cities!  And I will go to Köln and drink the Reissdorf Kölsch!

Prost zum gut Bier!  Reissdorf Kölsch!  Hanging with the best beers out there!

The daily beer painting is of Weihenstephaner Original from Germany.  This beer is so perfect, I don’t even know where to start.  First, the brewery is in a castle at a site where monks brewed beer around 1040, making it the “oldest, still operating brewery in the world.”  Second, there is a university for agricultural studies housed on the brewery campus, which, I have heard, has the best beer brewing classes in the world.  Third, this beer is so delicious it makes other beers bow down, as they are not worthy!  At around four dollars a half liter it is a good deal, too.  I know that breweries making this quality of perfect beer could charge anything they wanted and people would buy it just because it is perfect!  I first ran into this brew when a couple of Anchorage beer folks commissioned a painting of the heffe and dunkel heffe, because their son graduated from the brew school there, and they said, “It’s the best beer in the world.”  I liked both of those styles but the Original featured today really takes the cake.  A München Helles Lager, this beer rates 100 from the bros at Beer Advocate and gets a general high score from everyone else.  Make sure you check the freshness date on the bottle, since this beer is an unknown gem in some locations and may sit on the shelves too long.

To generations of brewing tradition, resulting in a fabulous brewing perfection!  When drinking this beer I exclaimed, “I would be fine if this was the only beer in the world!”  It is so good! 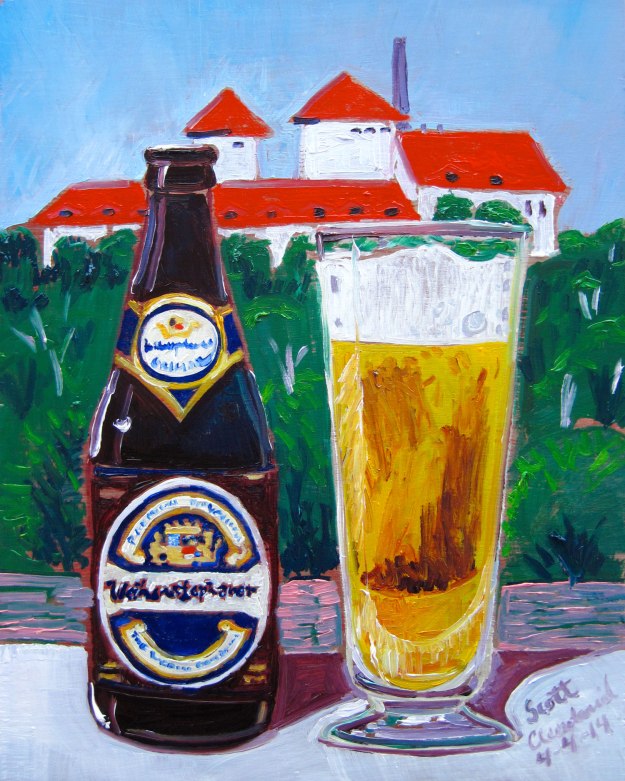 Today’s Year of Beer painting is Spaten Optimator, chillin’ in the streets of Deutschland.  On my first trip to Germany I went to Münich (München) with only weeks until my 21st birthday.  I was enjoying drinking legally overseas, my first introduction to bars and a pub crawl.  I pretty much only drank dunkles (dark) bier because I thought helles (light) or pils was boring.  On my second trip my wife and I went to a small town in the middle of Germany to visit her family in a town called Seesen.  I couldn’t find any good beer because I was shopping at the local grocery market, but then we discovered the drink (getränke) shops.  The drink shops in Germany stock beers that are really popular across the country, or available within about 100 kilometers of the store.  All the empty bottles are returned to the brewery for refilling.  Germany has an extensive brewing history, but unlike the U.S., most beer there is crafted in Reinheitsgebot tradition, so it’s almost impossible to find hop-forward ale there, however you will find a perfect pils after perfect pils.