This is the 101st Thirsty Thursday beer painting since the end of the Year of Beer Paintings in 2014.  Today is another installment of Beer Art History 101.  This week’s beer painting is a beer parody of Sandro Botticelli’s Birth of Venus, painted between 1484-1486.  That painting was commissioned by the Medici Family of Florence, Italy.  The painting is an attempt to recreate a lost Roman painting, and this is why the painting is not in the usual Renaissance style.  You can see stylized lines, making the painting seem more like Greco-Roman pottery and wall frescoes.  The painting of Venus rising from the sea as a full figured adult woman was inspired by the beauty of Alexander the Great’s mistress.  The original painting, as described by Pliny the Elder, was considered a masterpiece that unfortunately was damaged beyond repair.  Several of these paintings have been made, but the one we have today by Botticelli is considered the epitome of the concept.  I was thinking that the glass in my painting is full of wheat beer.  Now that Pliny the Elder has been mentioned, I am having a hard time not thinking of a West Coast IPA. Whatever its imagined style, you can say this is one beautiful beer that has arrived via clamshell.  My version of this piece is called Birth of Beer.  I would be astounded if I was at the beach and angels were blowing a beer the size of a full grown woman towards me on the beach.  Cheers to beautiful beers!

This original oil painting, and 52 limited-edition, signed art prints are for sale at my Etsy shop RealArtIsBetter. 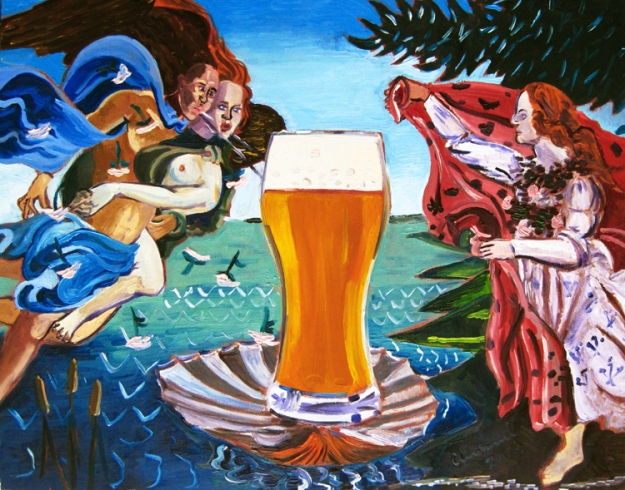 Beer parody of the Birth of Venus by Sandro Botticelli. The Birth of Beer by Scott Clendaniel. 14″x11″, oil on panel.

When we woke up this morning in the cabin in McCarthy, our iPhones didn’t have any service, so our first concern was that I wouldn’t be able to post a Thirsty Thursday beer painting for the first time since I started the project at the start of 2015!  The second thought that crossed our minds was that maybe the world had ended after last night’s Presidential Debate, and we had no way to find out, but then I remembered that I saw a jet fly by earlier.  We didn’t know whether we were the only ones having this problem, so when our neighbor stopped by for coffee, the first thing we asked him was wether his phone worked.  But he said it was low on power, and he hadn’t turned it on all morning, and left it at his cabin.  Luckily, someone, somewhere fixed the problem promptly, and now we’re connected to the outside world again.

I painted this piece yesterday next to the burning wood stove in our cabin, but I drank the Sunny Side up Coffee Stout by Pizza Boy Brewing Co. a few days ago, and I can tell you that it would be a great way to start the day.  My friend Rich gave me this can when I visited him in Philadelphia last month, and I brought it all the way back to Anchorage in my luggage.  He says he feels sorry for anyone who’s never had this beer, and I agree.  Drinking this beer with your breakfast eggs would be kind of like starting the day with a rock concert.  This batch of Sunny Side Up is brewed with coffee from Little Amps Coffee Roasters in Harrisburg, PA, so that’s why there’s an amp on the beer can, and band instruments on a stage in the painting.  As my wife sipped on her share, she commented that this is a nice coffee beverage with some beer in it.  Well, not just a little bit of beer, considering its 9.5% ABV.  If you drink this beer after 4PM, you better have a concert to go to, because there is so much coffee in this tasty hybrid beverage that you won’t be sleeping until well after midnight.  Pause your morning band practice and raise that coffee cup full of brew in a toast to Pizza Boy and Little Amps, a marriage of flavors from two great companies! 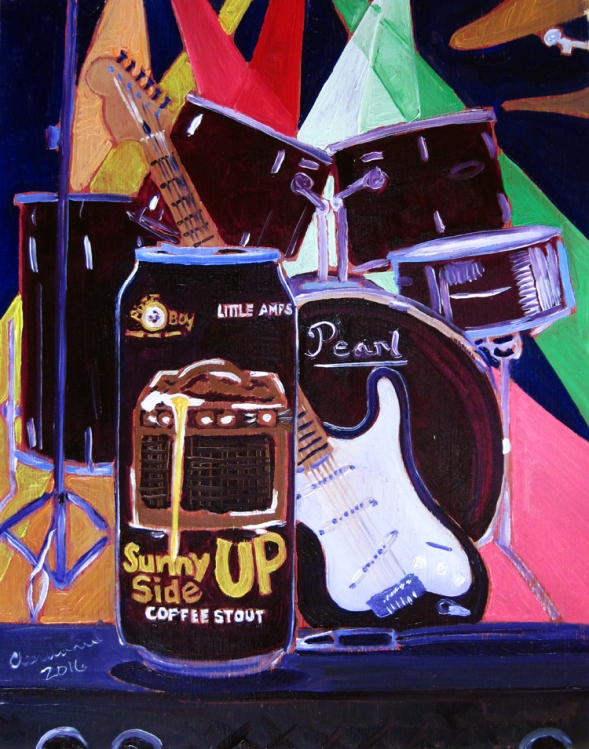 May the Dark Side of the Force be with you, Dark Lord Vader.  This may not be your father’s beer, and hopefully Darth Vader isn’t you father, either.  In my imagination Darth Vader would be swilling down a Dark Lord Russian Imperial Stout by 3 Floyds Brewing Co. right after he cut his son Luke Skywalker’s hand off, and told him “I am your Father.”  Dark Lord Day is in April, and is the only day that you can buy this indescribable Russian Imperial Stout.  Understandably, people line up at the brewery for hours to buy their limited amount of bottles of this decadent black big brew.  Leading up to one hell of a music festival with a load of bands and a DJ serving up sick music all day long.  I was lucky enough to get to try this beer at Culmination Beer Fest here in Anchorage.  Here’s a picture of Gabe Fletcher serving it up in 2012. 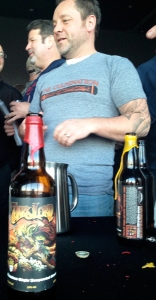 Brewed with coffee, Mexican vanilla, and Indian sugar, this beer is ridiculous.  I wonder why it’s not barrel aged.  I got to sample the 2012 version with the red wax.  Looks like Darth Vader is also drinking the 2012, or it could be the 2004.  Since he has the entire imperial fleet at his command, he would probably have whatever vintage he wanted.  I also thought the red wax was appropriate as it matches his light saber.

Cheers to 3 Floyds, brewing up a whale of a brew with the Dark Lord, and may the Force be with you! 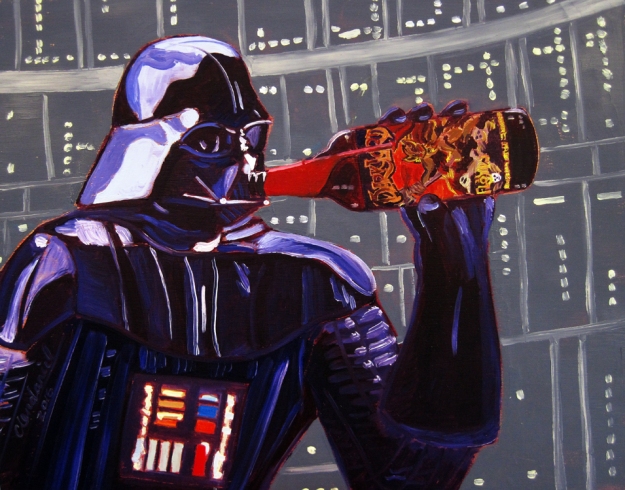 The painting for this week’s Thirsty Thursday is of a beer known as the Grapefruit Sculpin by Ballast Point Brewing in San Diego.  The brewery started distributing to Alaska just a couple weeks ago, and Alaskan craft beer enthusiasts welcomed the beer with open arms and wallets.

Germans have been flavoring their beer with lemonade and lemon-lime sodas for many decades, making a product called radler bier (cyclist beer), or a shandy.  Leave it to the West Coast Americans to make a beer that tastes like candy but hits hard with a 7% kick and serious hop character.  The lesson is learned, don’t feed this one to your wine-cooler swilling friends.  It sounds like they will like it, but save this one for yourself, you alpha-loving hophead.  Grapefruit and beer sounds like a terrible, mad dog beverage invented to get 16 year old high-schoolers drunk, but it’s actually a match made in heaven.  The twangy bitter-sweetness of the citrus fruit pairs perfectly with the 70 IBUs of Ballast Point’s Sculpin IPA.  As Ballast Point’s marketing department declares, “Grapefruit is a winter fruit, but Grapefruit Sculpin tastes like summer!”  Cheers to innovative craft breweries!  Hoppy American Craft Beer week!

This original oil painting, and 52 limited-edition fine art prints are for sale at my Etsy shop RealArtIsBetter. 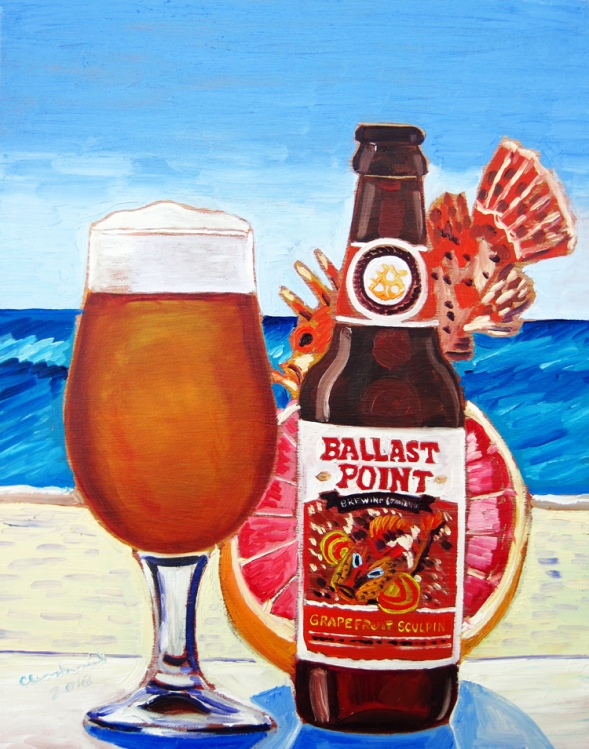 This week’s painting is inspired by Keith Haring, who passed away in 1990 after living a short 31 years. He died from health complications related to AIDS. His art is youthful, vibrant, socially charged and in my opinion, brilliant. He started out by creating social commentary pieces illicitly on black sheets of paper that covered unused advertisement space in the New York Subway. The resulting backlash not only granted him instant notoriety and fame, but also landed him in a heap of trouble. He was arrested a few times, and was forced to pay many fines. However, all of that paid off, because it resulted in a hugely successful international public arts career. Haring painted one of his most famous murals on the Berlin Wall in 1986.

Although Haring was a staunch advocate for safe sex, he was diagnosed with AIDS in 1987. Instead of taking the news badly, he became incredibly prolific, knowing his life would be cut short. Young, but close to death, Haring had a perspective on life that allowed him to produce stunning artworks that encompassed life and death themes that would be impossible under other circumstances.

I feel that Haring would find this version of his painting comical. He had a lust for creativity and art that I believe the craft beer community also embodies. It was not until I utilized his characters that I began to understand his aesthetic and viewpoint on life. The simple outlines are freeing and an amazing form of art that embodies the spirit of the 80s in a way I will never understand, since I was only a decade old when they ended. Cheers to great art! Thanks Keith Haring for living your life to the fullest!

The original oil painting, and limited-edition prints are for sale at my Etsy shop. 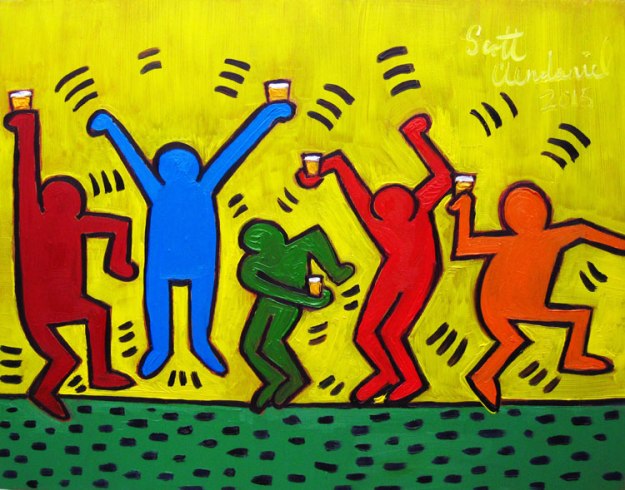