Today is National IPA Day!  For me, everyday is IPA day, but it’s nice to know that there’s a day especially dedicated to this hoppy style of brew.  I’m celebrating in the small community of McCarthy, Alaska, where IPA is the most popular style of beer aside from PBR.  I feel the only reason people drink PBR here over IPA is the price.  IPA requires a lot of hops, which makes it more expensive.  When I brew a five gallon batch and I dry hop the beer to make it an IPA, I lose a gallon due to hop absorption.  I need a huge french press to squeeze out the hops from the beer!
On Saturday Maria and I went to Cynosure Brewing, and were drinking a really fresh dry-hopped Hazy IPA called #005.  We convinced the local restaurant in McCarthy “The Potato” to purchase a keg per our recommendation.  The owner and beer purchaser for The Potato was an easy sell on a keg of IPA.  She said that IPA is the most popular beer they sell at the restaurant!  So the #005 is here and I can stop on in for a draft of the freshest IPA around.  I have a 1/6 barrel keg, here at my cabin, of Glacier Brewhouse IPA, which I had bought a few days before I made it into Cynosure.
In honor of the important holiday, tonight I will be having a little IPA tasting.  I have a couple of different selections from Anchorage Brewing and Broken Tooth Brewing, as well as the keg.  Cheers to hoppy beers!  IPA all the way! 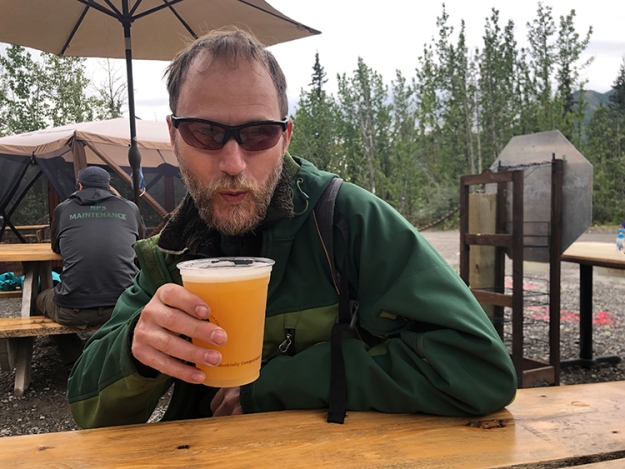 Today I painted the IPA from King Street Brewing Company, which, in my opinion, is one of the best canned IPAs in Anchorage, Alaska.  Although I am a huge fan of their Pilsner, as well as all their brews for that matter, the IPA is my favorite.  You can buy six packs at La Bodega, or at the brewery on King Street.  If you buy a six-pack, you can return the plastic can holder to the brewery for a free sample of something delicious.  I had the Winter Warmer as my free sample last night after the taping of the Better Beer Show.   That seasonal is a German style Bock.  If Germans drink Bock during the winter, that’s a good enough reason to drink it here in Anchorage.  Sorry to say this one is for local Anchorageites only as King Street keeps it local.  Too bad for people outside Alaska as this brewery is truly awesome!  I plan on stopping by their booth to sample their barley wine at the Great Alaska Beer and Barley Wine Festival happening January 17th and 18th.  Cheers to beer!  I hope you feel inspired to stop in to this local brewery!

You can purchase the original painting or a limited-edition print at my Etsy Shop.

Yesterday was my art opening at the Loft at Midnight Sun Brewing Co. and I tried not to drink too much beer other than what I was going to paint for this Year of Beer project.  So in order to try to stay close to my original plan of only drinking the beers I paint I brought home a growler of what was in the firkin.  Well, this wasn’t the cask conditioned stuff we were drinking last night, but it is the same base brew, the XXX IPA, which is pretty stout for an IPA I might add.  The show was great last night and I thank everyone who came out!  I especially thank anyone who purchased an original piece of work.  I was glad to see everyone come out to support me on my opening night!  Cheers!

You can purchase the original painting or a limited-edition print at my Etsy Shop.