Only two days left on the Big Island!  Have to go back to Alaska soon, but that is okay.  Although Hawaii has a couple brew oases, Alaska is in a different league!

The beer painting of the day is of an island familiar, known as Steinlager Classic.  New Zealand threatened to cut imported beer to the Island.  As a result, a European lager beer was brewed by Lion Nathan.  This beer, originally called Steinecker in 1957 after the tanks in which it was created, was changed to Steinlager in 1962 to establish brand identity from Heineken.  In 1973, the brewery established distribution to the United States and switched to a green bottle to be more in line with European-equivalent products (bad call as green bottles are more prone to light contamination).

Since I love Kiwis (New Zealand’s national bird and a slang term for New Zealanders), I put a big one in the background of this painting, eating bugs right behind the beer.  When I was on the cross-country running team in college I met several international athletes from NZ and learned how to drink beer.  Those young guys swilled the stuff down like it was going out of style.  They also taught me to sound like a Kiwi saying stuff like, “Gidday mate!  Put sausages on the Barbie, and a crate of Steinies in the chilly bin, bro, we’ll have a bugger sweet party.”  Translation, “Hello friend!  Let’s put some hotdogs on the grill and put a case of Steinlager in the cooler, we are going to have a damn good party.”

To all the Kiwis out there, here’s a toast to you!  Thanks for making a nice island alternative!  Steinlager, you are a unique brewery.  Producing international class lager! 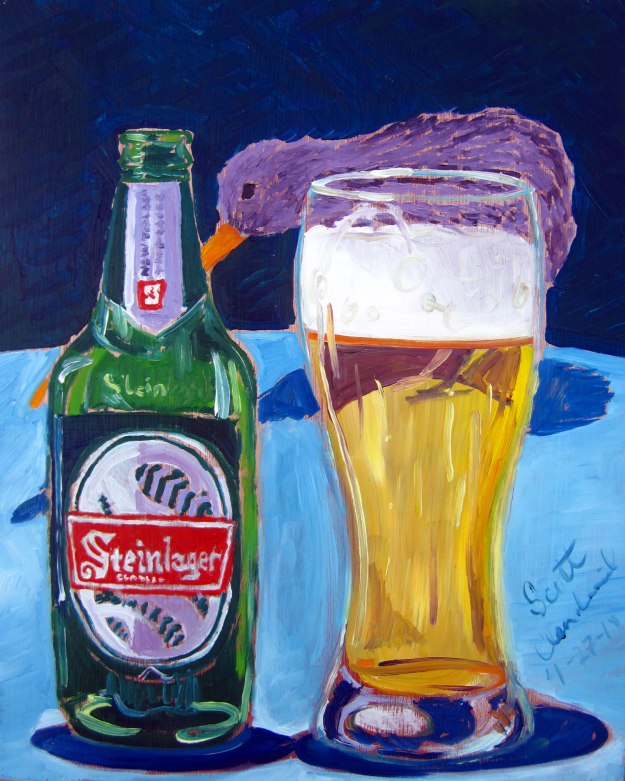