Deep black mahogany, as black as soot, with a flavor that won’t quit, but makes you want to come back for more. Barrel aged in whiskey barrels, nothing has quite the same flavor as a whiskey barrel-aged imperial stout. Firestone Walker’s Parabola is not one to be missed if you get lucky enough to find one. I was at Brown Jug Liquor Store in Anchorage, Alaska and I saw the fancy FW box being handed over to a gentleman. I inquired where I might also find the special liquid from the back basement cellar storage room. He went and brought me up a special bottle and I was surprised to find that the FW barrel aged ales were only $15 a bottle! For 14% beer that has been barrel-aged, that’s a good deal! Especially when it tastes as good as this one does! I opened this bottle on New Year’s Eve, and I believe it was a good choice.

I painted it with the Golden Gate Bridge in the background, because the landmark is between Firestone Walker’s two restaurants and tasting rooms. The Golden Gate Bridge is also the largest parabola that I have ever seen. The Eiffel Tower also has a sweet parabola at the base of it, but I figured it wasn’t Californian enough, and also much smaller. If you ever get a chance to buy a bottle of Parabola, I would highly recommend enjoying it as a picnic item on the rocks overlooking the Golden Gate Bridge. Cheers to Firestone Walker! An award winning, stellar brewery that distributes to Alaska! 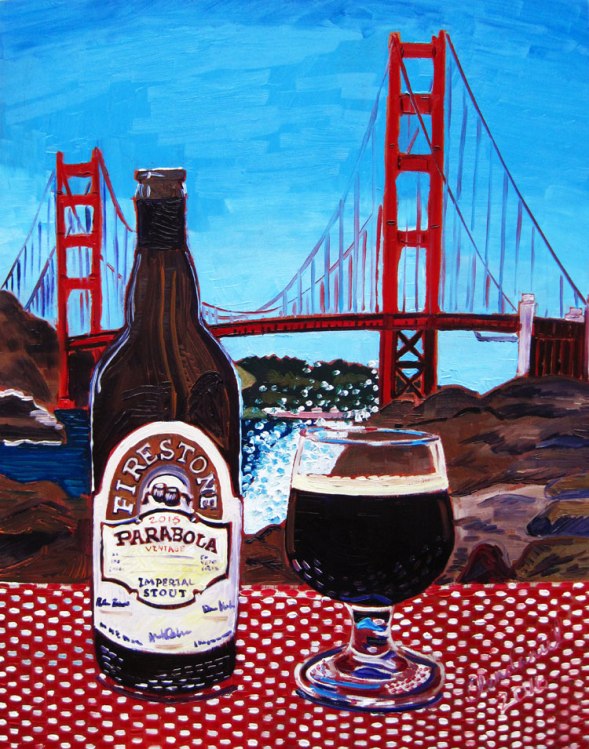 That pretty much sums up my ideal Friday night in my late 30s. Happy Valentine's Day!
Is this the farthest north a @Wawa Coffee Stout has ever been? #Anchorage #Alaska #wawacoffeestout #beer #craftbeer #fatbiking
Chillin' at the half-way point. #fatbiking #Alaska #Anchorage