The featured beer painting of the day is of Pilsner Urquell, the original Pilsner beer established in 1842. This fine golden lager is brewed in Plzen, Czech Republic, and is the source of inspiration for 9 out of 10 beers that are commercially available today. My friend Aaron Rathbone brought this bottle to Anchorage all the way from Prague! More heavily hopped than most Pilsners, the original bottom-fermented brew contains abundant helpings of Saaz and Noble hops. During the summer of 1842, 36 casks of beer were thrown out due to inconsistency and foul flavor in the bohemian town of Plzen. Josef Groll was hired to brew a new batch, and by October 5 the wort was already fermenting. The beer was ready by November 11, and the first Pilsner was tapped and served for the first feast of Saint Martin markets.

If you don’t like pilsner beer, I suggest giving it a second, third and maybe even a fourth try. It really starts to grow on you. The crispness of the malt and the yeast flavors that are created during the slow bottom fermentation produce a bread-like aroma that is unique to this style of brew. The Saaz and Noble hops balance out the sweetness to make a perfect beer. It is not a surprise to me that Pilsner beer took the whole world by surprise, changing the way people looked at beer. Almost every beer you will come into contact with, craft beer aside (although there are many great craft pilsners) will be a pale imitation of the real deal, Pilsner Urquell. Don’t buy the green bottles, though, unless you are in Plzen. It is now available here in the USA in light proof cans and dark brown bottles. Nothing makes this beer worse than light contamination. If you have never had a Pilsner Urquell before, I highly recommend sitting back and savoring one ASAP.

Na Zdravi! Cheers to your health, Pilsner Urquell, the brewery that changed the world’s beer scene! I hope you never quit making this quality product! 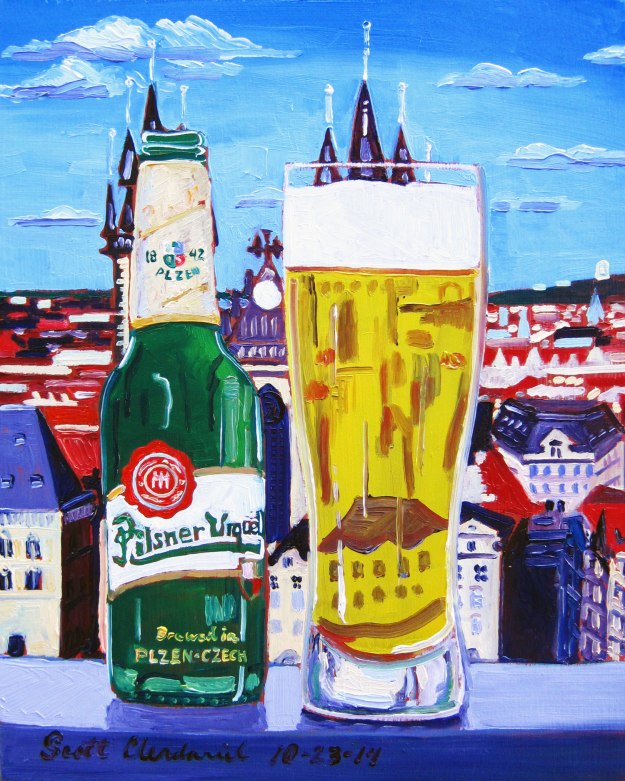