Wow! Only 70 days left in 2014! Only 60 until Solstice, which I am eager for, but don’t want to rush. I want to enjoy every day of the Year of Beer. I know the winter seasonals just hit the shelves, but I will wait to paint them at least until Halloween is over.

The featured beer painting of the day is of Red Racer IPA from Central City Brewing located in Surrey, BC, Canada. I know this beer is called Red Betty here in the States, but the same beer is distributed as Red Racer where it is brewed in Canada, so I went for the Canadian version. I know there are killer single-track mountain bike trails right there in British Columbia, so I put Betty’s bike parked on the trail. She is sipping on this cold one, or so my story goes. I love mountain biking, and I love beer, and I combined my two loves in this painting. This label makes me think of my beautiful red-haired wife who shares my love for biking and beer. That’s the trouble with paintings. I try to tell a story, but the interpretation is completely up to the viewer.

Beer is more concrete, and this one was a solid offering. An English-style IPA for sure, with a strong malt backbone. I am glad the brewers didn’t overdo the bittering hops. The aroma and flavor was piney, and reminded me of riding my bike in the spring right after the mud has dried up, and the new shoots are springing from the trees. This IPA is a very nice offering from BC, and I will make sure to drink more of this one when I roll through Canada, hopefully after a day of cycling, or hitting the slopes at a sweet Canadian ski mountain.

Cheers to the Red Racer IPA! A finely-crafted Canadian brew. I hope you get your hands on this can, because its flavor is uniquely BC. 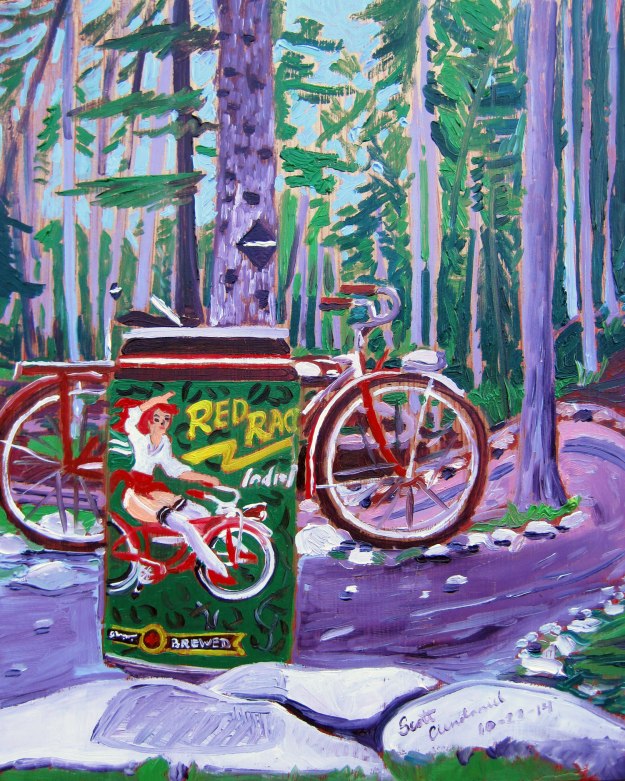