We recently completed our first 1% for Art project.  What is 1% for Art?  Here’s a short summary of the law.  The State of Alaska and the Municipality of Anchorage recognize that it is the government’s responsibility to foster the development of culture and the arts through the purchase or commissioning of works of art for municipal buildings, schools or other municipal facilities. So 1% of capital expenditures for municipal buildings and facilities are devoted to the acquisition of works of art to be permanently placed or incorporated in such buildings or facilities.  When there is a need for art, the State, or Muni requests proposals from artists for specific locations.  Many artists apply for these opportunities, and the competition is pretty stiff.  Artists from outside Alaska can apply too, making competition even tougher.  We’ve been submitting proposals for a couple years, and our list of rejections was getting pretty long.  But finally, we submitted a proposal for bicycle racks at Ryan Middle School in Fairbanks, and our project was accepted!  Then we had to submit a proposed budget, proof of insurance, a notarized and signed paper promising that we don’t have employees, so we’re not required to get Worker’s Comp insurance, and some other paperwork, before we were all set up to proceed with the fun part.

We recently had an epiphany that opened up many more opportunities in the public art realm.  We realized that we can hire fabricators to create installations, or sculptures that Scott designs.  Now we can propose pieces of art made from metal, glass, wood, anything!  Before, we were just responding to requests for murals, or paintings.  So Scott designed three bicycle racks that would be installed in front of the building.  They were shaped like a moose rack, a bear with a salmon in its mouth, and spruce trees.  We hired a local fabricator in Fairbanks, Warren from Alaska Ornamental Iron.  We chose him, because we had seen his work at a neighbor’s cabin in McCarthy, and his business seemed very professional.  When we called him, he said he could do the work, and promptly sent us a bid.

When Warren came to town on a work trip, he stopped by our studio, and we discussed the designs.  Scott made some tweaks, and sent them to Warren in various file formats.  Then Scott and I flew to Fairbanks to scout locations for the bike racks, and to meet with the school Principal, and maintenance manager.  We all discussed, and agreed upon the locations, and they approved the final designs.

Warren took several months to build the racks out of steel tubing.  He sent us pictures of his progress, and we forwarded them to our contact at the school, so they would know what was going on.  When the bike racks were complete, Scott flew to Fairbanks to help Warren and his team install them.  The installation took longer than expected, because such projects always do, so Scott didn’t have time to take photos for his portfolio before he had to catch his plane back to Anchorage.  So I flew to Fairbanks just for a couple hours a week later to make sure that the installation was completely done, and to take photos.  I rented a bicycle, so I could use it as a prop in the photos to demonstrate how the bike racks work.

I just sent off the final invoice to the school district.  There were three invoices.  One for 1/3 for materials, and another one a couple months later for Warren’s fees.  The final one is for travel expenses, and all other costs associated with the project.

In summary, I’m glad I did a lot of research about budgeting for public art projects, and read the book The Artist’s Guide to Public Art: How to Find and Win Commissions by Lynn Basa.  We read and heard about a lot of horror stories of artists going over budget and having to take out a second mortgage on their house, or getting in way over their head on a project that’s too big and complicated.  Luckily, we did everything right this time, got lucky with our fabricator, who ended up being very professional and created exactly what Scott designed.  We learned a lot about the process, and hopefully will have more opportunities like this in the future.

Bear with salmon in its mouth bicycle rack. 1% for Art at Ryan Middle School in Fairbanks. Designed by Scott Clendaniel, fabricated by Alaska Ornamental Iron. 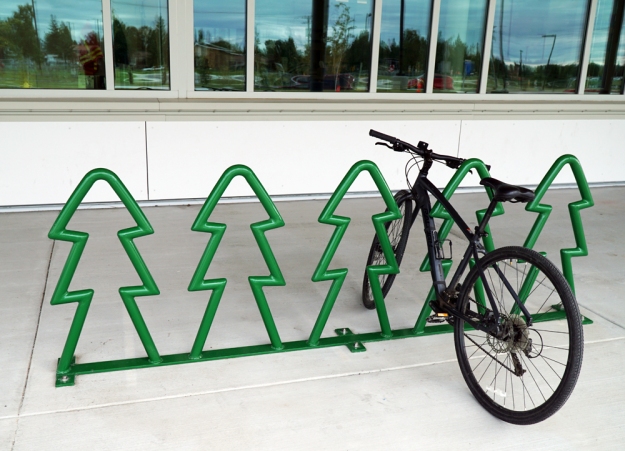