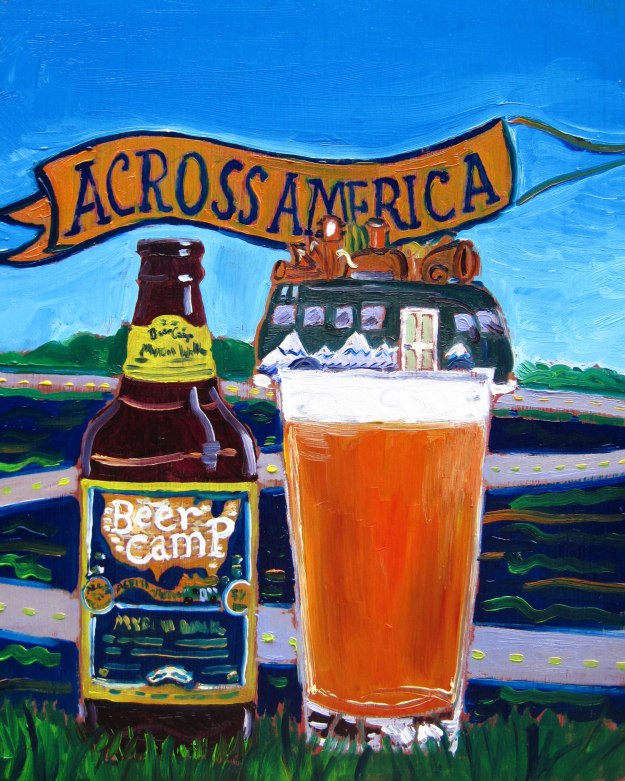 April 24th, and my trip to Hawaii is winding to a close.  Four whole days left and I’m headed to the Big Island Brewhaus in Waimea today!  I hear good things about it.  The beer painting of the day is Nooner IPA by Sierra Nevada Brewing Co.  I feel bad buying beer from the Mainland while I am here in Hawaii, but the selection on this island has left a lot to be desired.  The Arrogant Bastards would say it’s full of big business, not true craft brew.  I am finding pockets of good beer here and there, but it is more of a scavenger hunt than expected.  This island needs more breweries!  Okay, back to Nooner, what a perfect beach brew!  This tiny IPA comes in at 4.8% and packs a nice flavor like Torpedo on a diet.  I can have one and a half and still feel safe to make it back to the rental house!

Joe Sixpack gave Sierra Nevada and the entire American brewing community some flack about putting IPA in front of the name of every beer.  Since IPAs are hot, naming beers an IPA makes the beer sell better.  He was comparing it to Irish beers, which were all the rage for the last thirty years.  Joe, let me know when you see an Irish IPA and I will paint it!

As I mentioned before I am on the Big Island and I have been overwhelmed with beautiful flowers every day!  The one in this painting is one of the most famous tropical flowers, Hibiscus.  Hawaiian Hibiscus is actually normally yellow.  Most Hawaiian flora and fauna are tamer than their mainland counterparts due to the lack of predators and their isolation.  This Hibiscus growing at our rental house is actually a Chinese Hibiscus and is considered a pest.  Live and learn – an out-of-state beer with an out-of-state flower.  Can’t get a more Mainland mentality than that.

To Sierra Nevada, creating a perfect beach beer!  Way to keep coming up with great beer and great marketing!

Wow!  Ruthless Rye IPA!  Two of my faves in one bottle!  I love rye in a beer, and I love hops!  So this is a match made in heaven for me!  Plus, the brewers at Sierra Nevada Brewing Co. do such a great job!  I have never had a bad beer from that brewery, other than a stale Pale Ale, which was due to improper, long storage, but even then it was still palatable.  Rye is a strong grain that grows in many places and has a unique flavor!  I wonder why there is not more beer brewed with this pungent grain?

The “ruthless” part?  Must be the IPA, the high alcohol content of 6.6, or maybe the stringent spicy characteristic the rye imparts to the beer.  I think Joe Sixpack may be on to something in his last rant about breweries just plugging IPA in a beer name.  Accuracy in advertising?  Ruthless marketing?  Whatever it is, this beer is great.

To the crew at Sierra Nevada!  Making hop-forward beers for decades!

You can purchase this painting, or a limited-edition beer at my Etsy shop.