Today is the last Thirsty Thursday of the year! I hope you had a good time checking in on Thursdays. I won’t promise to post every week in 2016, but I’m not saying that I won’t. We do have some cool stuff planned, like our first Beer Art Road Show (BARS) that will happen in the Fall in California, where there is a plethora of world-class breweries to visit like Stone, Ballast Point, Russian River, Lost Abbey, and the list goes on. The last time I was in California was in 2009, and I had just completed the 99 Bottles of Beer on the Wall project. Now I am more aware of just how special California is for beer, whereas back in 2009 it was more known for wine.

So the last Thirsty Thursday beer painting for 2015 is of Sip of Sunshine IPA. This beer is so tasty! Lawson’s lives up to its name, it does make the “finest liquids”. I was surprised to read on the can that this beer is brewed by Two Roads Brewing in Stratford, CT. I wonder why it’s not brewed in Warren, Vermont, where LFL is located. Nevertheless, I feel lucky to get to try a fresh one all the way here in Anchorage, Alaska. A beer art fan in New Jersey mailed me this can. Although we get some seriously good IPAs here, none are 8% and served in a can. Bitter Monk by Anchorage Brewing is great, but at $10 for a 22 oz bottle, I only drink it occasionally. I wish the BARS tour was in Vermont in the near future, but since I was there in 2014, I guess I should go to Colorado first.

Cheers to the New Year, and stay tuned for more beer art in 2016!

Unfortunately, this painting is not available for sale, because Lawson’s Finest is the first brewery to send me a cease and desist notice for using an image of their beer in a painting.  You can read about it in this blog post. 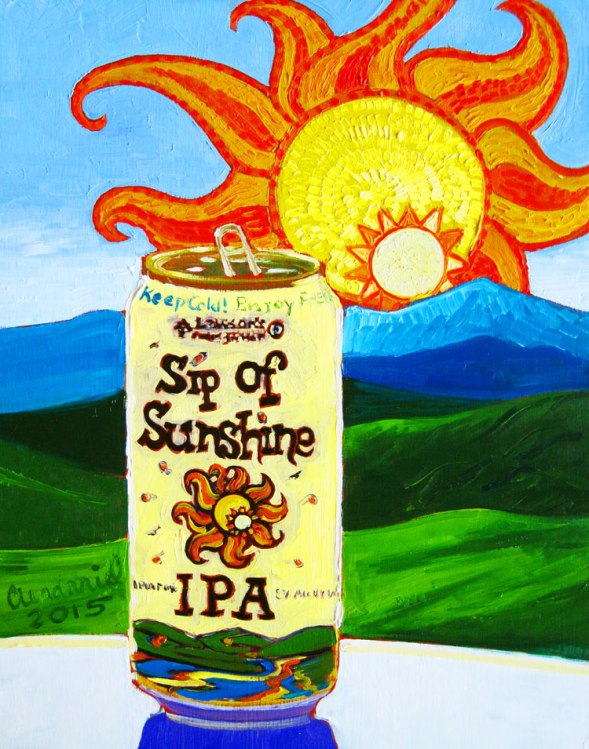