Today’s beer painting is of Smoked Porter from Alaskan Brewing Company.  This was the first smoked beer I had ever tasted.  The first release date for this particular beer is 1988, but I had my first one in probably 1999.  I was intrigued by the smoked concept, but didn’t get to try another smoked beer until 2001 when I came across a smoked porter by Stone Brewing Co.

A dark robust body, with pronounced smoked flavor, this beer pours out jet black with a creamy dark head.  The flavor makes me think of smoked salmon, hence the image in the background of this painting.  What could be more Alaskan (besides oil workers) than a Grizzly chowing down on Sockeye salmon?  This beer is good for aging in the bottle.  I bought this one pre-aged — the last 2012 on the shelf among plenty of 2013 bottles.  The fellow at La Bodega bottle shop told me it was the preferred vintage, and it was excellent.  I think I enjoyed it more than I did when I was much younger.  I have higher expectations now, and this beer did not disappoint.

Cheers to Juneau, Alaska, the only state capitol not accessible by road, and home to the largest Alaskan brewery! 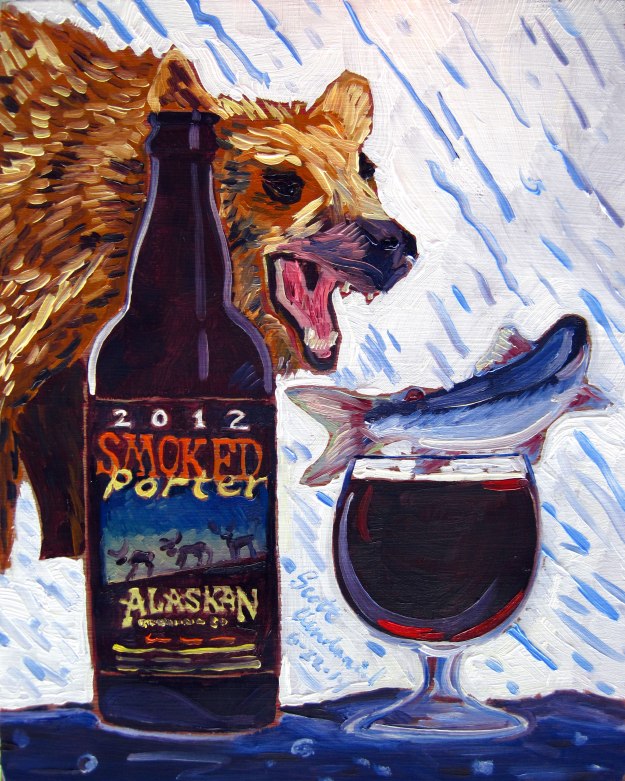