In 2012 Scott and I spent most of October in McCarthy, housesitting a neighbor’s tiny cabin with two huskies, while building our own log cabin near by.  We decided not to drink that month, because we imbibed a bit too much during the summer at endless parties that happen almost every night in McCarthy during the summer season.  Scott had read somewhere that the human liver can regenerate in one month, so we decided to give our livers a break for 30 days, while working on our cabin, going for walks with the dogs, and watching Netflix after dinner in the cozy dark cabin.  We jokingly started referring to that month as sober October.  Then in 2013 I took a break from drinking again in October, and this year we’re both doing sober October, five years later.  Scott decided to do a semi-sober October, meaning that he can have four drinks total every weekend.  I, on the other hand, haven’t had a drink in 15 days.  So why October?  For us this is the only month without birthdays, anniversaries, summer shenanigans, and major holidays.

This year I realized that many other people are also doing sober October, and turns out that it’s a “thing”, and maybe even a growing movement.  Of course, this is the month that breweries seem to be coming out with their most delicious offerings.  Anchorage Brewing has been releasing a new imperial stout, or hazy IPA almost every four days, while King Street Brewing now has a birch Russian imperial stout on tap, and Turnagain Brewing has a sour rhubarb ale that I would love to try.  Not to mention all the pizza parties, wedding parties and homebrew club meetings that I’ve been going to all month and watching my friends drink verticals of Bigfoot Barleywine and Smoked Porter dating back to 2000, while I sip on my La Croix.  Yes, Alaska has amazing beer, and is a tough place to do sober October, but I hope the benefits are worth the effort.

The most noticeable benefit has been more money in my bank account and a smaller credit card bill.  At the end of this month, I’ll have a pretty good idea about how much I spend on craft beer.  The second benefit is that I’ve lost three pounds so far without changing my workout routine, or altering my diet.  In fact, I’ve noticed that I’ve been eating more sugar lately, as my body craves more carbs.  I’ve been sleeping much better.  I used to wake up several times during the night, and sometimes couldn’t go back to sleep for two hours, before falling into a deep sleep and then waking up groggy.  Now I’m sleeping through the night.  I’ve also read that abstaining from alcohol for a month has a positive effect on blood pressure, insulin levels, and ever risk of cancer!

I’m half way done, and I can’t wait until November 1st when I can enjoy my first cold, refreshing beer!  Will I do this every year?  I don’t think so.  My goal is to cut down my drinking to just weekends, and if I do drink at social occasions during the week, I’ll only have one drink.  Moderation is key.  Which beer will I drink first?  Probably a barrel aged imperial stout. 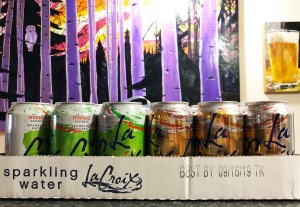 We bought two cases of La Croix to get us through sober October.