This time of year Alaskans start getting fed up with winter, but luckily, just before we all lose our minds, the annual winter festival in Anchorage called Rondy begins, and we all have something to do, and much to celebrate.  If you are in Anchorage, come down to 4th Avenue and watch the dog races, the Running of the Reindeer, and stop by our downtown studio, which will be open both Saturday and Sunday this weekend, as well as Saturday, during the start of the Iditarod next weekend.

I love living in an amazing little-big town like Anchorage.  We have all the benefits of living in a big city without all the congestion too many people bring with it.  If I get stuck in cross-town traffic I am still home in 20 minutes.  One of my favorite places across town is Anchorage Brewing Company.  Every year Gabe Fletcher from Anchorage Brewing makes a tasty malt beverage called Rondy Brew.  This year it is a single hop IPA made with Nelson Sauvin hops, which is a delicious treat.  This bottle is a collectors edition because it celebrates ten years of the Running of the Reindeer!  So, of course I painted it with a reindeer enjoying the brew. I imagined how much rowdier this pronged beast will be after getting a snootful of this hoppy stuff.  A double bottle serving of rowdy Rondy brew should bring this beast to its best form for the running.  Looks like this reindeer is chugging it too, only letting a little fall into the 4th Avenue snow.  I hope you contain your beast and remember to savor every sip of this delectable beer.  A bottle is $6 at the brewery, so stop in and have a glass and then Rondy with the rest of us!  Just remember to be “slick” it’s careful out there!

This original oil painting and only 30 limited-edition, signed art prints are for sale at my Etsy shop RealArtIsBetter.

Last week I was lucky enough to get to spend three nights at Manitoba Cabin as the artist in residence.  The cabin is nestled near the base of Manitoba Mountain, only 3/4 of a mile down a trail from mile 48 of the Seward Hwy.  So how did this opportunity come about?  Well, it all started when a patron commissioned a portrait of his two dogs, and wanted the Toba Yurt, named after one of his pups, in the background of the painting.  That’s one of the two yurts at Manitoba Cabin.  This patron is on the Board of Alaska Huts, the managing entity of Manitoba Cabin.  He’s very passionate about the place, and suggested that I spend some time there as an artist in residence.  We had never been there, and jumped at the chance.  Here’s the painting of the two pups in front of Toba Yurt.  Toba is on the right.

As we skied to the cabin with our gear, about a dozen people were skiing out.  The campus has two yurts, and the Hut Keeper’s Quarters, which is a cozy room attached to the main cabin.  All visitors share the cabin, the outhouses, and the sauna.  After we settled in, the people who booked the two yurts arrived.  We lost count of how many there were, but we think it was about 11.  They were all ski instructors from Alyeska’s ski school, and were there to celebrate February birthdays.  Of course we joined the party.  There was an outdoor fire, several cases of cheap beer, and a chocolate birthday cake!  Around 2 AM I headed to bed.

The next morning we went for a ski.  Unfortunately, we don’t have alpine touring gear, so we just brought our cross-country skis, and went up as far as we could.  After skiing I got to work painting.  The last time I painted outside was in Vermont at Hill Farmstead Brewing, and my fingers were a lot colder there.  The problem with working outside in the winter is that oil paint starts to freeze, and becomes more difficult to apply to the painting surface.  Here’s the piece I painted en plein air (outside on location).

Here is my work station in front of the cabin. 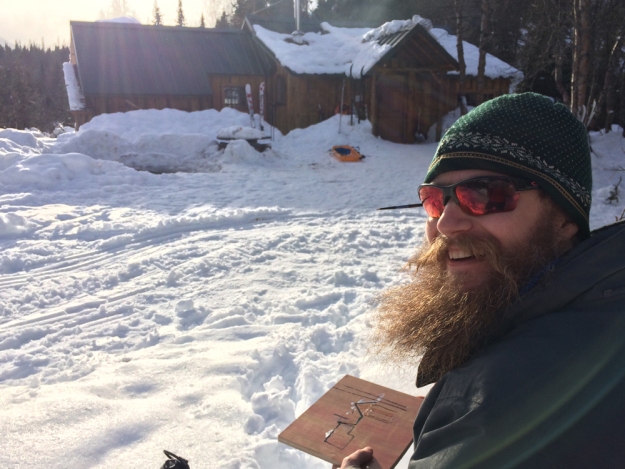 Nice sunny day after a bit of fresh snow.

After painting, I warmed up inside the cabin, and then we went for a walk to explore the area a bit.

The second night we had the whole place to ourselves, which made for a quiet and cozy Valentine’s Day.  We woke up to more fresh snow and headed out for a ski.  The second day I decided to paint inside to stay warm.  I like painting scenes from windows, so I chose a particularly picturesque window in the cabin, and painted the view.

While I painted, Maria read to me from a book called Gold Rush Wife, a story about a woman named Nellie who came to Alaska with her husband to mine for gold in the Canyon Creek area.  We were reading a story that unfolded right near Manitoba Cabin!  In fact, the cabin was originally built in 1936 as a mining cabin.  Then we read information about the area from a binder that’s at the cabin, and saw that there’s an old miner’s cabin still standing somewhere near by.  So in the afternoon we set out on our skis to find it.  We didn’t have to look long, it was right across the bridge.  The cabin was built in the late 1890s and now is property of the United States.  We had no idea about the rich gold mining history in the area, but now we know a lot from the reading material at the cabin.

The third night we had the whole place to ourselves again!  We spent evenings playing games, reading, and enjoying the wood-fired Finnish sauna.  The whole experience was very interesting, starting with the big party, and continuing as a calm, relaxing time in the mountains.  We’ll definitely be back, and will bring our friends, and alpine touring gear.  I’m giving the two paintings to Alaska Huts, and I believe they will be auctioned off at a fundraiser.

The work beast, a.k.a. our printer.

When Scott finished the 99 Bottles of Beer on the Wall series, we went to a local print shop, and ordered 5-10 prints of 20+ paintings.  We ended up paying nearly $600 upfront, and stored the prints until they sold.  The hefty upfront investment deterred us from ordering more prints, until we had a game-changing idea in 2012 to buy our own printer, and make the prints ourselves on demand.  Epson had relatively affordable printers available, and one we chose, the Epson Stylus Photo R3000, was on sale.  The printer arrived via FedEx, and when we turned it on, it refused to work, because it insisted that the ink cartridges that it came with could not be recognized.  So we mailed that one back, and Epson sent us a replacement, which worked.  Our printer requires nine different cartridges, each one costing $31.99, plus shipping (they are not available in Anchorage).  I usually wait for a coupon code from Epson to arrive in my e-mail box before placing an order, but today I noticed that I was running dangerously low on one color, and ended up paying full price.  Doh!

The first step in making a print is taking a quality photo.  I take several pictures next to the large windows in our studio in the best possible light.  Then I choose the best photo and use Photoshop to adjust levels, brightness, contrast, saturation, etc., trying to match the image to the original painting as much as possible.  Next I connect my laptop to our work beast, the printer, load it with high quality Epson photo paper, and print the image from Photoshop.    Most of the time, the printer is a champ.  Sometimes it bleeds ink, or prints lines on the image, meaning the heads need a cleaning.  So we throw away the rejects and try again.  Then we consult our list of paintings that have been released as limited-edition prints, and find which number comes next, and we write the number at the bottom of the image, like 54/365.  Scott signs each print, and then we package them in plastic sleeves with heavy duty backer board, and a certificate of authenticity.  Then it’s ready to be mailed, or sold in our studio, or at a venue that sells Scott’s art, like Dos Manos, or Midnight Sun Brewing (in January and June).

Our prints come in three standard sizes that fit in store-bought frames.  Some people choose to have them professionally framed, but you can also buy a more affordable frame at many stores.  Unfortunately, the size of our prints is limited by the size of the printer, but maybe someday we can upgrade.  Our printer’s max paper size is 13 inches wide.

The name of our business is Real Art Is Better, because we believe that original art is better than reproductions, but we understand that not everyone can afford the originals.  The other major upside to making prints is that once an original painting sells, we can still keep selling the image, allowing more people to have it, and enjoy it.  Last year prints accounted for about a quarter of our sales.