Last Saturday, after an excellent ski day, we headed to Anchorage Brewing Company for Orval Day!  If there is one thing I love about Anchorage Brewing Company, aside from its world-class beer, it’s the events that are held at its new location.  Culmination Beer Fest is incredible, and Zwanze Day was special.  Thanks Gabe Fletcher for bringing us such awesome festivities to our hometown!  I was about the 101st person in line at Orval Day, which meant that the person ahead of me got the last Orval glass.  Luckily, Gabe had an extra one in the back, and since he is a supporter of the beer arts he made a special effort to make sure I received the correct vessel for this special libation!  The monks at Orval have perfected their beer recipe.  Not too sour, nor too hoppy, or too sweet, or too high in alcohol.  Brewed with Belgian candied sugar, dry-hopped, dosed with Brettanomyces, and brewed by Trappist Monks who know what they are doing, makes this a special beer indeed.  Demand is high for this Abbey-made brew.  The monks produce 2 million gallons a year, and although that is not enough to satisfy the world’s demand for this tasty ale, the monks say they are not brewing a drop more.  They say that they are an Abbey first and brewery second, and if they increased production the brewery would take over the monastery.  The other amazing thing at Orval Day was the Orval cheese also made by the Trappist monks.  This cheese is not distributed outside of Belgium, France, or Holland. Orval Cheese is a Plateau cheese, and is soft and mild with an incredible hand-washed rind.  Let me say it goes well with the beer!  Anchorage Brewing Company was packed with beer loving Anchoragites.  It seemed like everybody in the beer community was there.  A wonderful day!  Thanks Orval for putting so much love into your fine brew and cheese!

The original oil painting, and 52 limited-edition prints are for sale at my Etsy shop RealArtIsBetter. 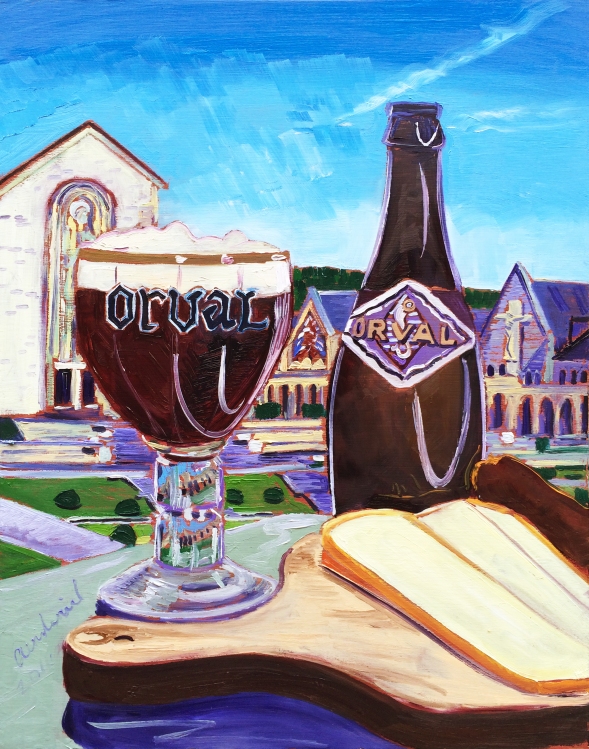 Henri Rousseau (1844-1910) was known for his jungle series of paintings.  Though he painted over 25 of these large paintings, the one that is most famous is The Dream, which was quite large at 9 feet by 6 feet.  It probably made a room feel tropical.  Living in Alaska, where it is white outside and everything is still in hibernation mode, I enjoyed getting lost in the jungle while painting this boozy version.  I love the lushness of the jungle and the way that Rousseau included so many animals hidden in this painting.  When I was researching famous paintings and found this one, I saw the woman with her hand empty and immediately thought that she needs a pint.  I know that when I am in the jungle I crave an ice-cold carbonated beverage.  Not only because the tropics cause perspiration, but it just fits the setting.  Unlike here in Alaska where, in the depths of winter, I would much rather have a small barleywine than a large yellow lager!  I am calling this piece The Dream Pint, because I live in Alaska and often dream of being in the jungle drinking a beer.  Hope you enjoy this one.  Cheers to exotic beers!

The original oil painting sold, but you can purchase a limited-edition print, or order a custom beer painting at my Etsy shop RealArtIsBetter. 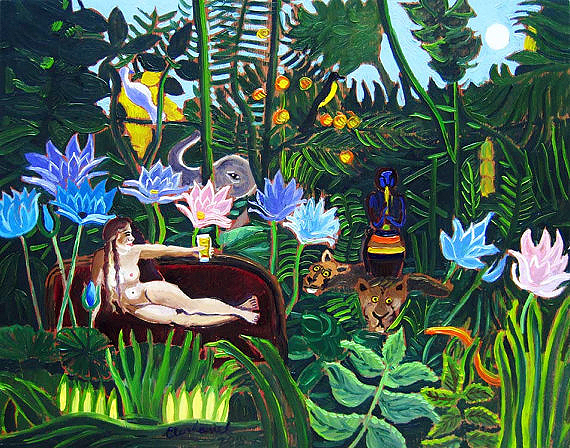 Close up of pint.

Scott and I have both been working full-time on our art business, Real Art Is Better, for about four years now, and we’ve learned a few things about being self-employed.  So here are the top ten.

In conclusion, we both agree that we prefer working for ourselves, and our goal is not to have to work for someone else in the future.  However, we constantly have to be on our toes to keep the business rolling.  No slacking allowed.  One of my favorite quotes is, “If you don’t build your dream, someone else will hire you to build theirs.”

Claude Monet, considered the father of Impressionism, painted during his epic life span of 86 years, completing his famous Japanese garden paintings at the peak of his career between 1897-99.  Monet moved to Giverny, near Paris in 1883, and bought the adjacent plot of land from his home in 1893.  He transformed that lot into a beautiful Asia-inspired garden with exotic plants and an arched bridge.  This garden was the inspiration for the piece I sampled for this week’s Thirsty Thursday beer painting.  Monet is an inspiration to me for his use of color, the way he represented light in his work, and his hard work ethic.  I call this painting Light Struck due to the way Monet handled light in his work, but also because if you leave your beer too long unattended in the sun it will become less delicious.  Have fun, but put a beer cozy on your pint!  Cheers to the gold of the sun!  Here’s a green painting for St. Patricks day!

This original oil painting, and 52 limited-edition prints are available for sale at my Etsy shop RealArtIsBetter.

This week’s Thirsty Thursday beer painting is a nod to International Women’s Day and the Pink Boots Society, so I invited my wife and Business Manager, Maria Benner, to write a guest blog post about her experience brewing a batch of Big Boots Brew at Midnight Sun Brewing Company last Saturday.  For the painting I sampled the 1942 war effort sign made by J. Howard Miller of Westinghouse Production Company, designed to increase morale for the all-female workforce at home.

The Pink Boots Society is a membership organization for female brewers that has been empowering women beer professionals to advance their careers in the beer industry through education for 11 years.  Every year, around March 8th, many breweries across the country host “no boys allowed” brew days.  The last two years I have been invited to brew at one of my favorite breweries, Midnight Sun Brewing.  I think the idea is for everyone to brew the same beer, and we brewed a citrus saison.  Last year I also got to participate, and I distinctly remember adding about 10 pounds of Red Hots to the kettle.  About a dozen women got together to brew this year, and our fearless leader was Chelsea Hendricks, a brewer at MSBC.  She does a great job explaining the brewing process and putting us all to work.  Sampling beer was part of the job 🙂  I could only stay for 2.5 hours, but it was long enough to appreciate all the hard work that goes into producing one batch of beer.  The important lesson is that women “can brew it!”

Cheers to all the women pioneers in the brewing industry, and to the Pink Boots Society for making it possible!

The original oil painting sold, but you can purchase a limited-edition print, or order a custom beer painting at my Etsy shop RealArtIsBetter. 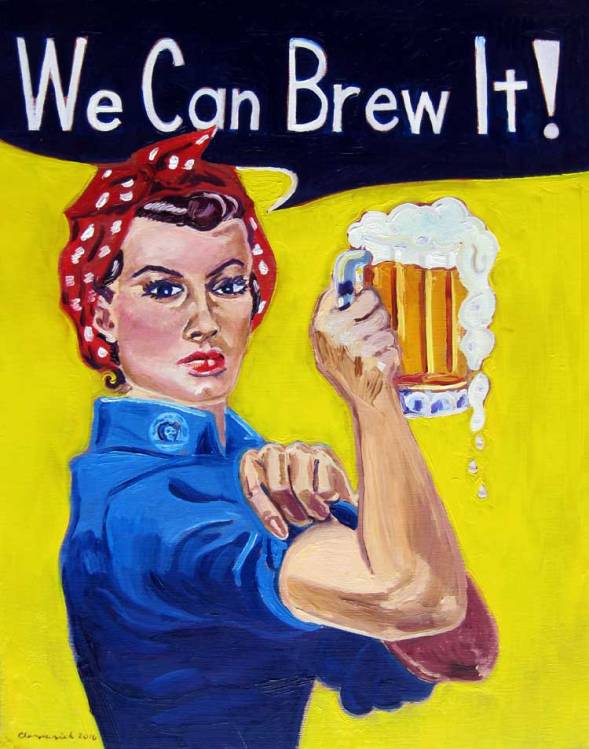 I’ve been managing our art business as my full time job for about four years now, and naturally I’ve been learning as I go, because I didn’t learn how to sell art in business school (shocking, I know).  So I read a lot of blogs, I follow artists, entrepreneurs, and consultants on social media, and I learn from experience, and trying out new things.  Selling art online is extremely convenient, but Anchorage is also a big part of our market.  The studio is a great space for hosting occasional open studio events, mostly for people who are already aware of Scott’s art, but we also need to gain exposure by having art shows at other venues.  Galleries don’t work for us (and I won’t go into reasons in this blog post), so we try to find other places.  Our favorite venue by far is the Loft at Midnight Sun Brewing Company, and we have shows there every January and June.  But to fill in the rest of the year, we booked shows at a couple new venues this year.  First up was Heritage Coffee Company in Juneau.  This art show was organized by Taku Graphics, and was a fitting venue, because it hosted a release party for Heritage Coffee Brown Ale by Alaskan Brewing Co.  All we had to do was mail beer-themed prints to Juneau, and everything else was taken care of.  The upside was getting exposure in Juneau for the first time, and not having to hang the art, or take it down (which is actually not too difficult).  The downside was the high commission.  So, probably won’t be doing that again, unless we negotiate better terms.  Next was Resolution Brewing Company in November (and we were asked to stay for December).  Brewery tap rooms are great venues for three reasons.  One, unlike galleries, which don’t get much traffic, tap rooms are typically full of people.  Two, alcohol lowers inhibitions!  Three, when we go to check on the art show, we have to order a beer (it would be rude not to), and since we’re there for business purposes, the beer is tax deductible!  I just wish there were more breweries in town that were good venues for art shows!  The other new venue this year is SubZero Microlounge.  Another place that serves alcohol (notice a theme here?)  We were surprised to find out that this venue does not charge a commission!  Why?  Because they don’t handle the sales (bummer).  That makes it harder for people to buy the art.  They have to read Scott’s artist statement to get our contact information, and contact us to buy a painting.  The upside is that this venue is close to our studio, and at the end of the day we can walk over there to check on the show and… it would be rude not to order a drink.  The jury is still out on this venue.

The easiest place to sell art, besides online, is at our studio.  We hosted a holiday open studio in December, and another one during the Fur Rondy and Iditarod weekends.  There was a craft fair going on in the building, so many people came through our doors to look at the view of the carnival and Denali, and some of them walked out with Clendaniel prints and paintings.  During those three days, we earned enough to pay the rent on the studio space for three months.

So, what other venues do you know about that would be a good fit for Scott’s art?  We’re willing to try them out.  For April and May First Fridays we’re taking a break from having art shows elsewhere, and we’ll be hosting an open studio from 5:30 – 7:30PM.

The featured beer for today’s Thirsty Thursday project is by Victory Brewing Company, known as the Java Cask.  I’ve had almost every barrel-aged beer that Victory has produced, but the Java Cask is hands down the best barrel-aged offering I’ve had from Victory!  It tastes like coffee beans making sweet music that was designed to be tasted and not heard.  This stout is brewed with JB’s Coffee, so I created an image that incorporates Johnny Brenda’s restaurant, but modified the scene to show coffee beans singing to the barrels in the audience.  All I can say about this 14.3% bourbon barrel-aged beauty is that it is phenomenal.  If you have an opportunity to get your hands on this treat of a beer, you will find that it makes music to your tastebuds!  Cheers to Victory’s barrel aging program!  The Java Cask is a masterpiece of the brewing art.