We spent two weeks in McCarthy earlier this month, and while at a great BBQ on the West side, I invited myself over to my neighbor Jason Lobo’s place to paint one of his many interesting vehicles.  Although we live in the same subdivision, his lot is about a mile away.  I walked, as I felt it would be easier to pack the painting home walking than biking.  Also, the road is a mud swamp due to spring meltdown, so driving was less than desirable.  I arrived to find Jason working in his yard.  After a few minutes he gave me a tour of his new water truck, which is a F-750 Ford.  Parked right next to it was this beauty, a vintage Dodge Power Wagon.  A great truck, and it still runs!  I love how it has not been restored, but has all the scars and patina of a working machine.  I guess the fuel pump is out, because Jason has connected a gravity fed fuel tank.  I had a great time painting this cool old McCarthy truck, stopping every hour, or so, to chat with Lobo.  He was working in the garden planting onions, garlic, and potatoes.  I walked home in the afternoon to have a late lunch, and then got some of my own yard work done.  Overall, a pretty productive day.  By the way, this isn’t the first time I’ve painted one of Jason’s trucks.  Check out the painting of his red Ford. 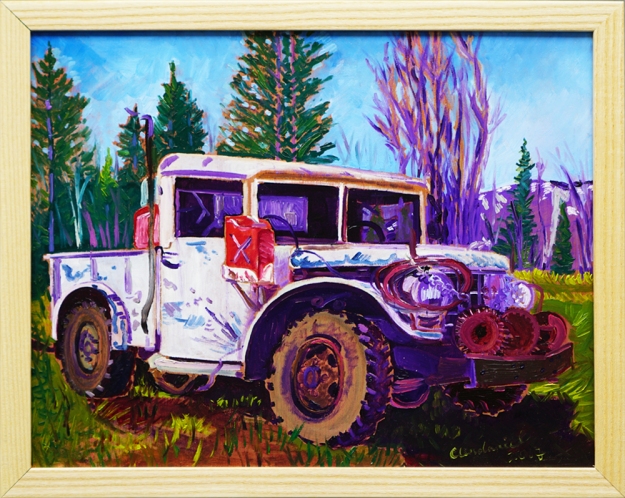 Each year my brother’s family hosts Thanksgiving dinner.  I am fortunate to have a large family, and this year we had 24 guests!  I was personally responsible for the dinner rolls, so the previous night I made a huge batch of dough and left it on the counter to rise overnight.  In the morning the dough was prime for shaping into rolls, so the first thing I did was shape 48 dinner rolls and left them to proof on the baking sheets.  Then I went into my studio because working as an artist full time means that I work pretty much every day, even on holidays.  I was working on a painting of a Mustang and listening to NPR, which was focusing on consumerism discussions and commenting on Black Friday starting on Thursday this year.  I kind of laughed as my painting of a vintage muscle car reminded me of American consumerism.

I had to stop a few hours in as my wife needed to roast a duck as a supplementary bird (for the deconstructed turducken), which meant that I had to bake my buns first.  This took an hour as I had four sheets of rolls to bake.  Then back in the studio to finish the Mustang painting. 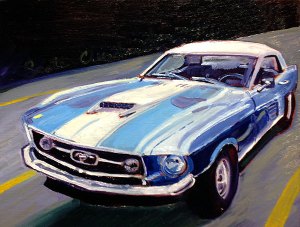 Then I rolled out the yoga mat and prepared to run 5 miles, just enough to build an appetite.  Then we loaded up the old pickup and rolled to my brother’s house.  The food was awesome and I sampled some amazing beers.  We not only had duck, but also ham, and prime rib, as well as turkey!  What a feed!  Then for the entertainment!  Every year my family has a Thanksgiving ping pong doubles tournament and the winners’ names get engraved on a special plaque that my brother hangs in his rumpus room.  Maria and I had been practicing all week at home on our little end tables, which I had modified to be the height of competition pong tables.  This really helped with improving our accuracy.  Since it is a doubles tournament, I partnered with my niece and Maria partnered with my nephew.  Although my brother and sister won the tournament, I think my practicing really helped my game.  Maria and I donned our official 2014 Sochi Olympics polo shirts, just to get in the competitive spirit.  Our niece and nephew are in Russian immersion grade school and really thought that was cool.  It was truly a fantastic Thanksgiving!

A print of this painting is available at my online shop.  The original sold.

Monday this week, I went down to mail at the airport in McCarthy, Alaska. I had planned on making this painting of the volunteer fire department truck.  However, as I drove past Tony Zak, the fire dept. building, I noticed it was all in the shade, making me hesitant.  After socializing at the mail shack for an hour or two, talking to neighbors on finer points of snowmachines, (the Alaskan term for snowmobile)  I noticed the sun was getting higher in the sky.   I went back to the Tony Zak building, after returning some library books (this is a community center with a library as well as the FD) I got to work. The sun popped out and I was able to get some work done, My hands didn’t get all that cold despite the snow and colder weather.   Painting there reminded me of spring skiing!  Well I hope you enjoy this painting as much as I did making it!

An art print of this painting is available at my online shop.  The original sold.

I am back in Anchorge.  This car is parked on the parkstrip and is part of a BB’s character.  It was nice to see a restored auto for once.  I also liked the trailer behind it…well for lack of anything better to say I will keep this entry nice and short if any one has more info about this restored Ford give a comment…

An art print of this painting is for sale at my online shop.  The original sold.

Saturday, Jason Lobo was out of town so he asked Maria (my wife) to stop by to feed his various animals. He has two horses, two goats, a pig, a turkey, and a kitty cat.  The horses took some hay, while the rest of the animals, minus the cat, took some green pellet animal feed, even the turkey.  While Maria was searching for the pellet feed and cat food, I was painting this portrait of Lobo’s red truck.  Jason lives about a mile from our house and on the same road, the Sandstone trail, so if he needs to go to McCarthy he has to drive past our home out there.  It always seems that I am headed to town at the same time as Jason Lobo, which is very interesting, because normally he has all of his animals with him.  Just last week he was driving this truck, (without the animals) and he was using gravity to propel him down the hill (it’s all down hill from where I live out there).  We were on our way into town and jumped on the Jason Train!  First time jumping into a moving vehicle since my high school days!  MXY is always an adventure!

An art print of this painting is available at my online store.  The original is for sale at Dos Manos gallery in Anchorage, AK.

An art print of this painting is available at my online store.  The original is for sale at Dos Manos gallery in Anchorage, AK.

I have been working on these trucks now for a week! I love them! I think I will be incorporating them in my next big show of the year at the Midnight Sun Brewing Co. Loft.  I look forward to putting some growlers with the trucks maybe… So the old green truck is a MXY fixture that has been obviously turned into a public sculpture and garden planter.  It is a testament to the sweat and labor McCarthy residents of the past have endured.  The GMC is just plain (plein) sweet! I wish I had that truck although I may pass on the fastback because as an artist I always need to haul plywood. I hope you enjoy these as much as I have!

An art print of this painting is available at my online shop.  The original is for sale at Dos Manos gallery in Anchorage.

These three trucks are resting on Shushana Ave. in McCarthy, Alaska.  I know the red one runs, probably all three run.  The red Ford arrived this year and is in the possession of Mark Wacht, a local resident.  As for the other two they have been there since I started coming to WSENP in 2005.  Maybe somebody knows and I will fill you in on whose they are, and what they need to become mobile vehicles again.

An art print of this painting is available at my online shop.  The original sold.

Continuing with the trucks on the Nizina Avenue of McCarthy, Alaska.  I still have about 6 or so more on this street to represent.  Feelin’ good painting outside after a long break!

An art print of this painting is available at my online shop.

An art print of this painting is available at my online shop.

This is an iconic truck, which I hear might run, however since I have been coming McCarthy, Alaska, in the Wrangell St. Elias National Park in 2005 I have never seen it move.  Kids mostly play on it and hang out in the neighborhood with it. Another thing I might mention is that this truck is parked outside the Wrangell Mtn. Center, a learning establishment that puts on programs for college students and the local community.  The larger of these two paintings will be auctioned off as a fundraiser for the WMC during an event called Tall Tales.  I hope you enjoy these two little truck paintings.

This is an old derelict from the alley near my condo in Anchorage.  I used to drive an old Olds wagon and wanted to spend a little time appreciating this old relic.  I wonder if it even starts, probably not, even with a new battery.  They sure don’t make ’em like they used to.

An art print of this painting is available for sale at my online shop!  The original sold.