I have been painting the beers from Kenai River Brewing since I started the Year of Beer Paintings project in 2014.  I’ve done a painting of each of the canned beers, four total, and every one of them went to the private collection of Doug Hogue, the founder and owner of this great Soldotna beer oasis.  Kenai River Brewing has been brewing up some avante-guarde styles like XPA, Black IPA, Honeymoon Heffe, and a Gummy Bear Belgian Triple, as well as some style-perfect traditional ales like the Peninsula Brewers Reserve Blonde, Skilak Scottish, and Sunken Island IPA.  All I can say is this brewery is a gem.

Soldotna is on the way to Homer, and I was driving there to attend our friends’ wedding celebration, so I planned ahead and brought my painting kit so I could paint live at the brewery.  This was my first visit to the new building, which now has a restaurant and a large dining room.  I ordered the bacon cheeseburger (see picture below), and set up my painting station outside in the back.  I should have included the colossal burger in the painting, which is as good as the best burger I’ve ever had.  Half a pound of fresh beef, with a great bun, pepper bacon and crispy fries on the side.  I think a brewery should have classic pub fare and KRB does this perfectly.  Food and beer coming together in a great establishment with easy to access service, making this place a near perfect example of what a brewery should be!  If you haven’t visited this stop when you are on the Kenai, you are missing out!  You can get a taster paddle with four 3 oz tasters, made from local burl wood.  I chose to paint my taster paddle because it looked like a work of art to me and showed off the dedication to detail that KRB consistently exhibits.

Doug found me outside while I was painting, and bought the painting.  I took it back to the studio in Anchorage, so it could dry, then varnished it and framed it.  I delivered the painting to Doug at the brewery while I was driving to go dip-netting at Kasilof, and we shared a bottle of my homebrew.  I got a picture of Doug and I with this painting out back. I will be returning to KRB next time I head to Soldotna!

Cheers to great Alaskan beers, good food, and a beautiful place to enjoy it all!  Way to go KRB!

The original oil painting sold, but limited-edition art prints are for sale at my Etsy shop RealArtIsBetter. 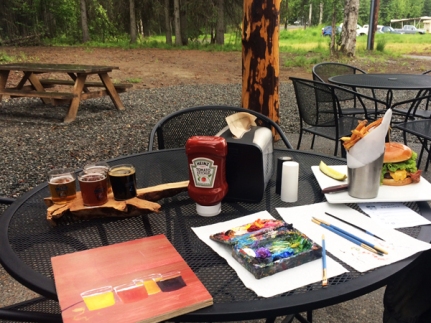 My painting set-up, the inspiration, and lunch. 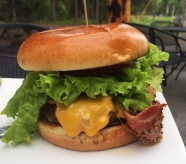 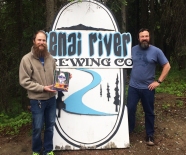 Founder and owner, Doug Hogue and I. 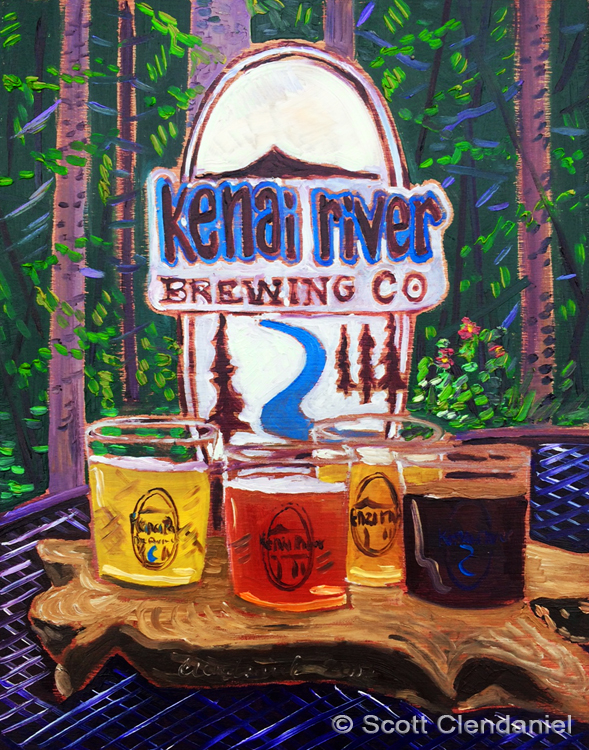 One of my side gigs is working as a freelance guide for a local tour company, guiding only 2-3 trips per year.  This allows me to see many different places in Alaska, and to do the fun things that mostly tourists get to do.  I get to meet interesting people from around the world, and the extra income is a bonus.  So a couple years ago I guided four different groups that all had an identical itinerary.  That may seem redundant, but the tour included a train ride to Spencer Glacier, and a flight around Denali with a glacier landing.  So in a span of less than two weeks, I got to land on Ruth Glacier on Denali three times!  The fourth group got to fly around Knik Glacier, because Denali was unapproachable by plane due to a storm.  We flew with K2 Aviation.  One of the guests exclaimed as she stepped down from the De Havilland Otter onto the glacier on Denali, “If I had known about this, it would have been on my Bucket List!”  That really sums up the whole experience.

One of the fun parts of my job as the Business and Marketing Manager for Real Art Is Better is brainstorming with Scott about ideas for new paintings.  So, a couple months ago, I remembered that summer that I got to fly around Denali three times with K2 Aviation, and I suggested that he paint one of the the iconic red airplanes flying in front of Denali.  He painted this piece, which is 20 inches x 30 inches, oil on panel.  The painting was on display at Scott’s solo art show at Midnight Sun Brewing Company this month, and it sold on opening night.  Scott allows customers to take the paintings right when they buy them, so the painting is now hanging in its new home.

If you haven’t taken this flight, I highly recommend it.  Put it on your Bucket List!

Limited-edition art prints of this painting are for sale at our Etsy shop RealArtIsBetter. 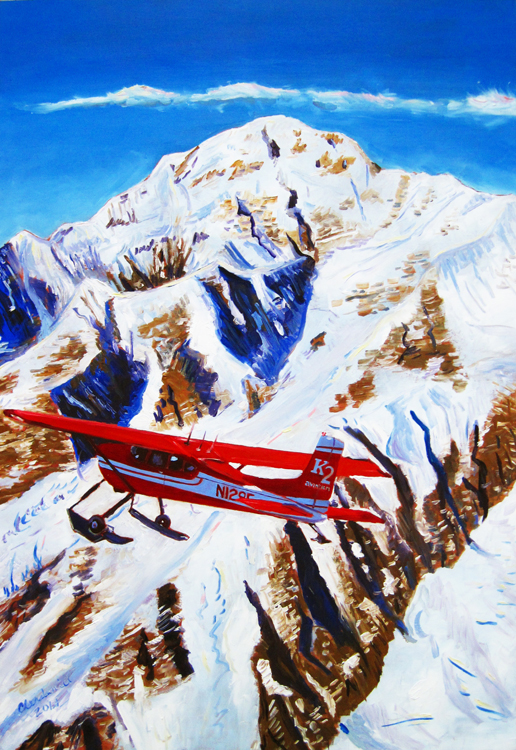 The person who bought this painting posted a picture of it on Instagram hanging in its new home, along with another one of Scott’s paintings that he bought at the same time of the Coastal Trail in winter time. Part of my duties as the Vice President of the McCarthy – Kennicott Historical Museum is to volunteer for a couple hours a week at the museum.  So, over the years, I’ve spent quite a bit of time in that building, looking at artifacts and at black and white photos from the late 1890s – early 1900s.  One day I decided to make an oil painting from two black and white train photos that I saw at the museum.  As anyone can tell by looking at my paintings, I like to use bright colors, so I went to work trying to recreate the photos in color.  There was no way for me to know what color things should be, but being in the same setting where many of these photos were taken, gave me a pretty good idea.

Recently, the museum asked me to design a new sticker, so I looked through many photographs of the Kennicott mining town back in its hayday, and put together the painting below that I named First “Lode”.  This depicts the first train load of copper pulling out of Kennicott, on its way down to Cordova and onto a steamship headed to Tacoma.  I worked from several different black and white photos to put together this scene.  Seeing today’s ruins of Kennicott was very helpful in helping me decide what colors things should be.  In the future, I plan to make several more paintings like this based on those photos hanging at the museum.  Creating large, colorful oil paintings from small black and white photographs highlights those historical moments, bringing more attention to them.  In any case, I’ve stumbled onto an interesting new genre that I’ll be experimenting with.

Here’s one example of a train oil painting that I did based on a black and white photo.  Prints of this painting are for sale at my Etsy shop. 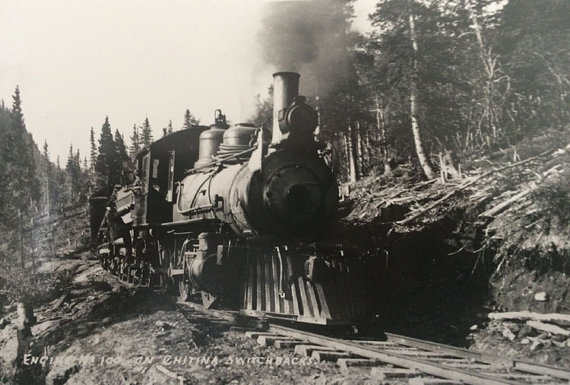 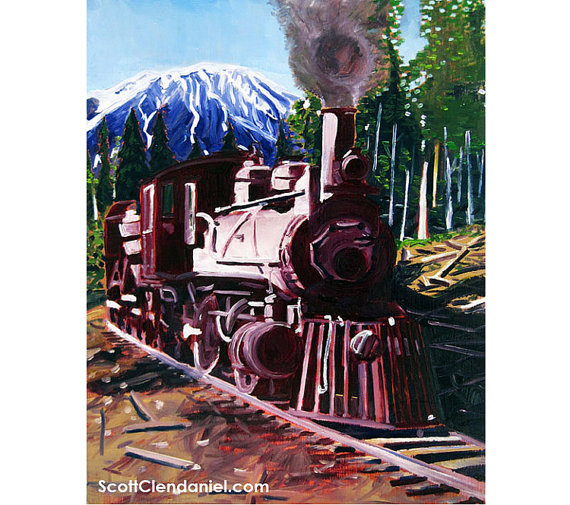 Another example of a train painting.  Prints of this painting are for sale at my Etsy shop. 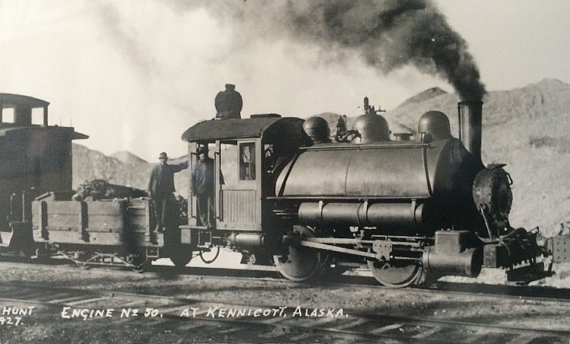 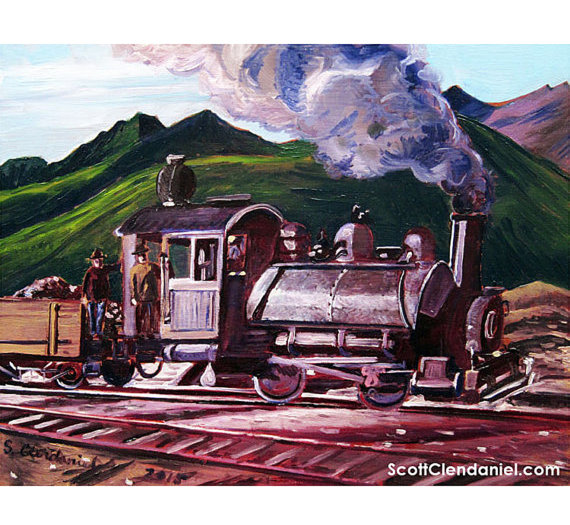 And this is the latest piece that I painted from a combination of photographs and my imagination called First “Lode”.  Prints of this painting are for sale at my Etsy shop. 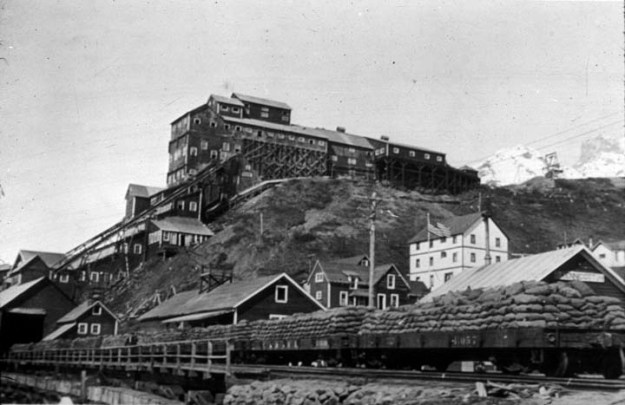 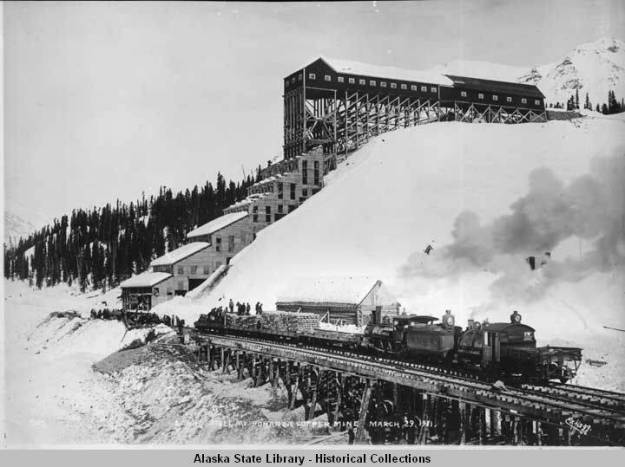 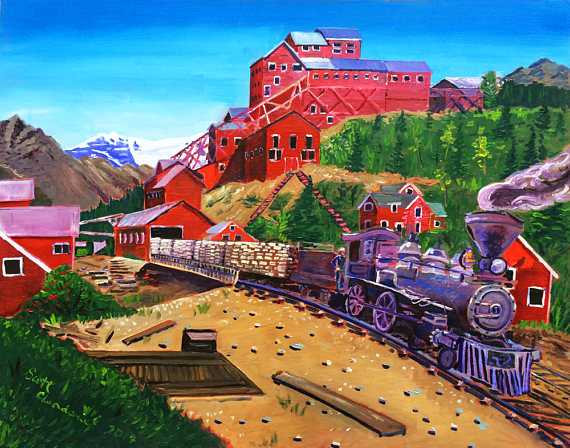 Finally, the little ski town of Girdwood has a brewery!  My prayers have been answered by Girdwood Brewing Company!  Beer and skiing go together like bread and butter, and now, at the end of a day on the slopes, we can stop for pints of fresh brew.  Last week I visited the tasting room for the first time.  I sampled 3 of the 4 options, and all were solid.  The coffee stout with K-Bay Coffee from Homer, Hippie Speedball, was noteworthy, as was the East-Coast-style IPA, No Woman No Cryo.  I chose to paint the IPA because it showed off the printing on the glassware better.  This place has some serious Girdwood-Alyeska ski culture as well as the yeasty variety.  The walls have some cool skis on them, the menu board is made up of old skis and there’s a ski fence forming outside, as well.  They even have an old red ski-lift chair hanging from the ceiling.  For a brand new brewery, this place is going strong already.  The only thing missing is food, but occasionally a food truck stops by.  Cheers to local breweries!  Be sure to visit this place next time you’re in Girdwood.

This painting will be on display, and available for sale at my art show at Midnight Sun Brewing Co. during the month of June.  The art show kicks off on First Firkin Friday, June 2, 5-8PM.  I’ll be tapping a firkin of Panty Peeler cask-conditioned with pineapple at 5PM.  Hope to see you there! 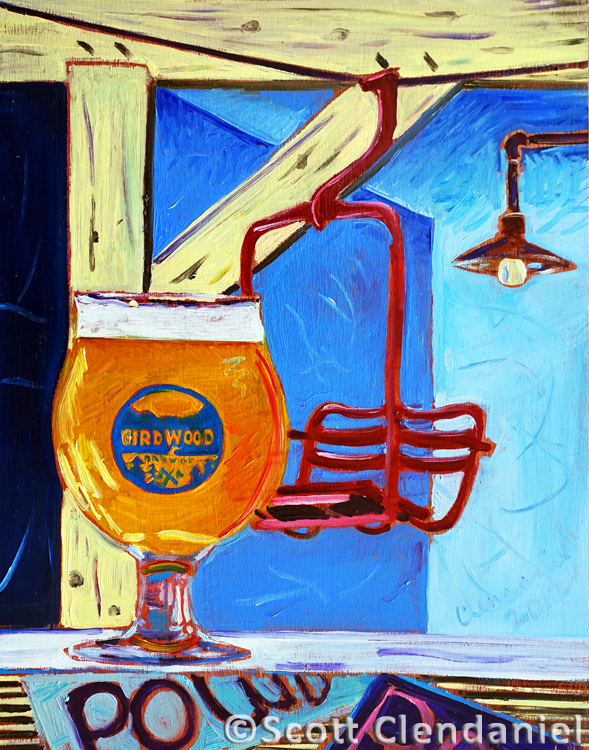