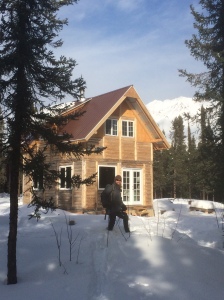 Back at the cabin after a skiing adventure.

People always ask how I like living in McCarthy.  They must see my Facebook posts and just assume since I spend a lot of time there that it’s my primary residence.  As of now, I live in an efficient downtown condo in Anchorage.  As much as I love going to McCarthy, and the Wrangell – St. Elias National Park that surrounds this cool mountain town, I will probably never spend more than five months of the year there.  It’s really remote without a real gas station and only a small seasonal grocery store.  Maria and I have been building a cabin on our lot two miles south of the town of McCarthy for about four years now.  We bought the lot in 2005, and I convinced Maria that we should start to build a cabin there in 2010.  In 2012 we broke ground on the foundation and started the log work.  Three summers later we were putting the roof on.  This year we installed the wood stove and moved in!

We have lived in a small apartment style condo in Anchorage since 2006.  It has been really efficient, and at 730+ square feet, two bedrooms with a small bathroom, it is not luxurious, but cozy and comfortable city living.  I just cleaned the entire pad in about an hour this morning.  However, it feels cramped after a long winter and I was just dying to go to McCarthy in the winter now that the wood stove is in.  Hanging out on our ten acres in the woods after living near the heart of Anchorage without an outlet to private outdoor space left us feeling hankering for some wilderness solitude.  I convinced Maria it would be cool to head out for a week in March, ski in with sleds of supplies and just hang at out mountain home.  I did some painting and Maria did some business work in the mornings and we would adventure in the afternoons.  Later in the day, which are getting longer and longer as spring rapidly approaches, we would burn large fires of forest brush in the outdoor fire ring.  On a couple of noteworthy outings we skied around the sleepy town of Kennicott, explored on skis the icebergs on the West side of the glacier, skied up McCarthy Creek, and in and around our neighborhood.  Overall, it really gave me a great feeling of mountains wilderness beauty that satisfied our itch to leave the hubbub of the city  behind. 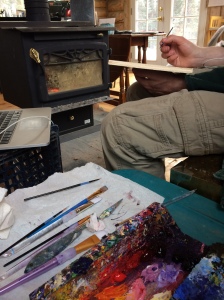 Working next to the wood stove.

The trip was great, but a week was long enough during March.  First off, water is a problem in our subdivision.  We are up on a bluff, so you have to spend some serious cash to put in deep wells, so most of the time we collect rain water from our roof.  This works really well during the summer months, and in winter there is snow, but it takes a lot of energy and time to melt snow.  We can’t drive to our lot during the winter as the bridge is covered in three feet of snow and so is the road up to our place.  It is a snowmobile haven, and a good place to ski as well.  I ski, since I don’t have an Arctic Cat or a Ski-Doo.  Water is heavy, so we had to ration it to avoid too many heavy loads.  Another problem with wilderness living in the winter is using the outhouse, which is really far away from the warm house, and is frozen.  Lastly, the wood stove is an archaic technology that is a lot of work to keep a log cabin warm.  It’s hard to find wood that isn’t too wet from snow.  It seems that it rained and froze right before it snowed, and even though I stored the wood under a tarp, there was a lot of it full of moisture.  Yes, we are in the process of building a necessary woodshed, but as I said, we aren’t even fully done building the place yet.  The house has a bunch of drafts and we need to finish chinking, as well as installing a bunch of important trim pieces.  It seemed I was constantly loading the stove, until the creosote clogged the pipe.  This turned out to be a major cluster, but fortunately it happened at the end of the week so we just went home.  Next time I head out, I have to bring a chimney brush, climb on the roof and maintain the stovepipe before we have heat.  Then we will have to hope we don’t burn the place down.  It seems silly to have a house that is made of the same combustible stuff we heat it with, but it’s working for now.

Maria skiing past an ice berg on Kennicott Glacier.

After a week in the woods, I’m glad to be back in Anchorage.  Working at the comfortable studio with running water, and hanging out in my small cozy condo at the corner of downtown and Fairview.  I can buy groceries and gas, drive on plowed roads, have indoor plumbing, and a thermostat.  The wilderness is very inspirational, and I loved my trip, but I also know that the people who live out there are some tough hombres.  It isn’t easy living off grid especially as you are building systems.  One thing goes wrong and you could be living in a cold cabin… or worse.

We waited for this giant slab of snow and ice to crash all week, and it finally fell with a loud thud on our last night at the cabin. 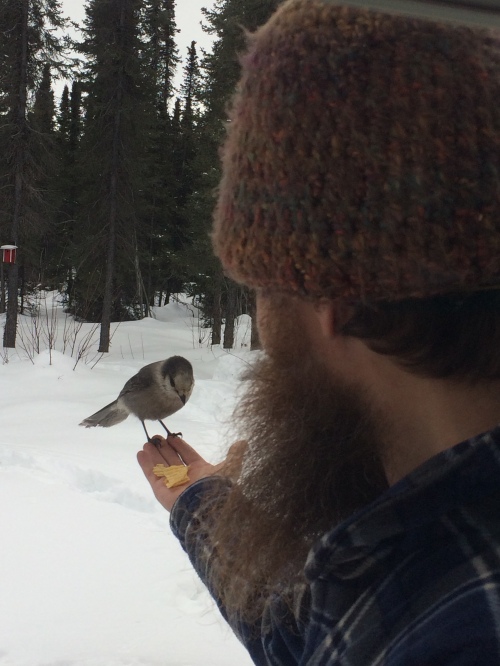 The gray jays were happy to see us. They finally started eating out of our hands last summer. 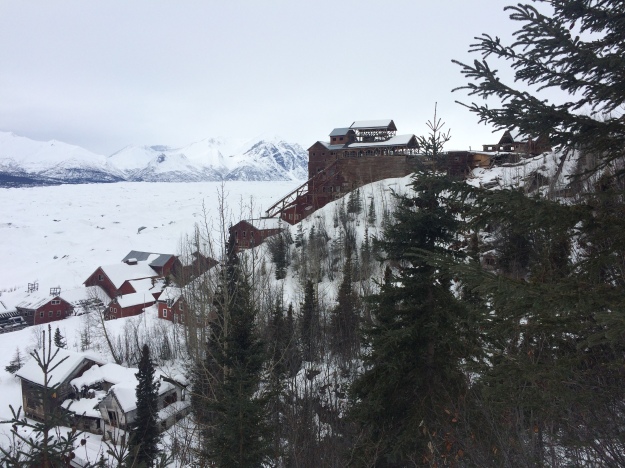