It’s AK BeEr WeEk!  Brave the cold, revere the beer!  Tonight is my favorite night of AK Beer Week, the Great Northern Brewing Club‘s industry party.  I just dropped off a keg of my home brewed Sunkissed Grapefruit IPA to the 49th State Brewing Company, the hosts of tonight’s shindig.  If you live in Alaska, and love beer, you should join the GNBC. When you join, you get 10% off ingredients at Arctic Brewing Supply, and 10% off at La Bodega, along with other benefits.  Membership is only $30 a year per household.  GNBC parties are hands down some of the best gatherings a beer lover could ever imagine!
Beer week is a great addition to Alaska’s dark, cold January. Thanks to Barb Miller, the instigator, and organizer!  Some of the best events are the many beer dinners around town, and special beer offerings at breweries throughout the State.  The full list of events is at AKBeerWeek.com.

It all culminates in the epic weekend event, the Great Alaska Beer and Barlywine Festival, which is one of the best beer fests in the nation with more barleywine than you can drink (no that is not a challenge, it is a fact!).  I recommend the connoisseur session on Saturday afternoon, as the glass is better (real glass) and the barley wine offerings are more plentiful.

The Saturday afternoon session presents the marching bagpipe band, and the  barleywine and winter warmer contest winners are announced.  Overall, a great week to visit Alaska!  Fortunately, the airlines haven’t figured this out, so you can get some of the cheapest rates to Alaska at this time.
So why is there a rubber chicken in this painting?  Well, there’s a guy named Phil, who has been coming to Anchorage for the GABBF for decades, and he always brings a rubber chicken, and takes photos of people holding his chicken (not choking it).  If you are willing to pose for the photo, he rewards you with a bead necklace that has three chickens on it.  So, the rubber chicken has become the mascot of AK Beer Week.
Cheers to AK Beer Week, when Alaska’s craft beer takes the forefront, where it belongs!

This original oil painting, and limited-edition prints are available at our Etsy shop RealArtIsBetter. 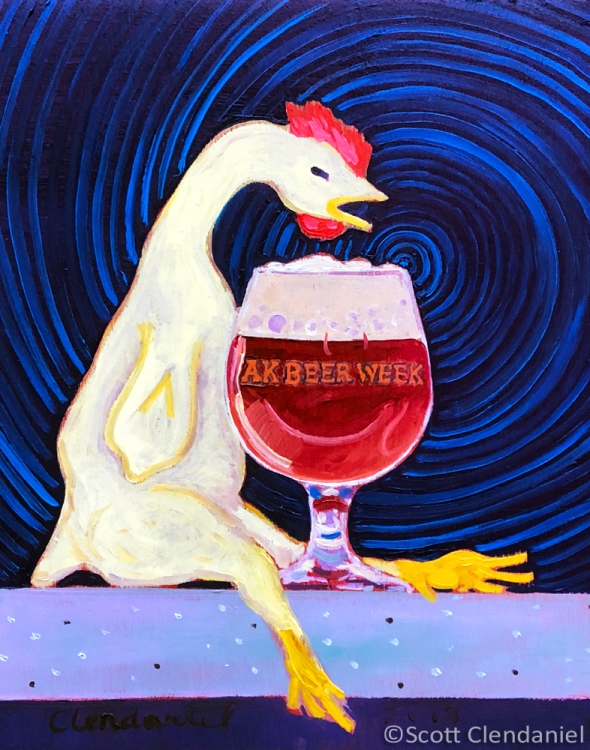 Two-Hearted IPA by @BellsBrewery. Limited-edition, signed prints available at my Etsy shop, just in time for Valentine's Day. Save 15%, and get free shipping. Click link in profile, and click the Etsy Shop button. #twohearted #michiganbeer #craftbeer #beerart #beerpainting #beerartist #realartisbetter #bellsbrewery #valentinesdaygift #fishing #michigan #twoheartedriver
Check out my collection of greeting cards, in case you need one for Valentine's Day. 15% off, and free shipping. Click on link in profile, and click the Etsy Shop button. You'll find all the cards in the Art Greeting Cards section. #Anchorage #valentinesdaygift #Alaskanartist #realartisbetter #greetingcard #artcard
Here are some of my little oil paintings currently on display at @midnightsunbrewingco. The Hofbrauhaus one is brand new. 8" x 10", oil on panel. Stop by and check out the entire art show at the brewery. Happy Friyay! 🍻#beer #beerart #midnightsunbrewing #Alaskanbeer #craftbeer #beerpainting #beerartist #realartisbetter #Anchorage