Leonardo Da Vinci must have been a beer drinker.  Here’s my reasoning: 500 years ago Italian water was polluted, and wine was too expensive and much too strong.  Jesus was a bearded man who wore sandals, no doubt he drank beer too.  Plus, 2,000 years ago the water was just as polluted and wine was even more expensive.  Leonardo Da Vinci’s mural painting of the Last Supper at the Sante Maria Del Grazie in Milan is one of the most famous paintings in the world. I have had it on my to-paint-as-a-beer-parody list for months, but I was intimidated by all the details I would have to paint.  It occurred to me it was time to make this painting when I realized that I would be releasing my 100th Thirsty Thursday painting on Thanksgiving, so it had to be remarkable in some way.  When I think of great feasts, the Last Supper comes to mind.  I’m calling this piece the Last Beer Tasting.  According to the Gospel John, Christ told the disciples that one of the twelve would betray him.  It is at this moment that Da Vinci depicts the Last Supper.  The gospel tells us they had bread and wine, but maybe they actually had beer instead, which is a form of liquid bread?  As a beer connoisseur it seems plausible to me.  Anyway, don’t get too wrapped up in this painting.  I don’t think that what is on the table should take away much of the overall meaning that Da Vinci originally portrayed.  Of course the  true meaning of a painting is only what you take from the experience you receive when viewing it.  I hope you find this whimsical and not blasphemous.  Cheers to the feast!  May you be forever thankful for the bounty at your table!

This original oil painting, and limited-edition, signed art prints are for sale at my Etsy shop RealArtIsBetter. 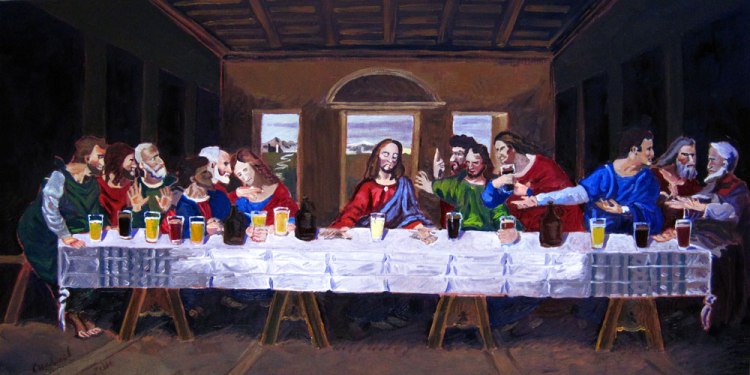